I think that this is one I may have posted before, but I will go ahead and post it again now, just in case. 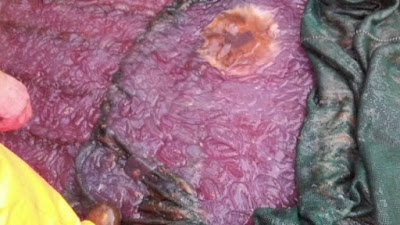 In August 2015, fishermen fishing off the coast of Northern Norway began reporting a strange phenomenon in the area. A thick, purple, mucoid slime had appeared almost overnight, covering millions of cubic meters around the Lyngen Fjord.

Experts who investigated the phenomenon likened the texture of the slime to that of margarine and initially believed it to be the remains of dead jellyfish. The slime covered the fish that the fishermen were catching and even messed with their sonar equipment. A fisheries expert said that he had never seen anything like the purple substance in the fjords.

However, now almost three years later, no real confirmation has been given that the slime did indeed come from a type of jellyfish. Therefore, the reason for its existence remains a mystery.

This story is another mystery from the folks over on Listverse, bless their hearts.

Seems like all kinds of strange things have been happening of late. Slime...ewwww.

Ewwwwww! Sure glad I didn't come across that.

It was those RUSSIANS, obviously.

Hey Momlady...
That it does...that it does.
Thanks for stopping by this morning!


Hey Linda...
I sure don't want to catch any of it myself.
Thanks for coming over today!


Hey Bigfoot...
I hadn't thought of them, but you might be on to something!
Thanks for the visit this morning!

Sounds pretty nasty what ever it was. I don't want to think the fish went to market.

Time for coffee to wash that thought away

Yuck...Its enough to make me not want to eat seafood...well, almost:) Save me a seat on th a patio:))

Hey Jo...
I think they would certainly not sent the fish to market...hopefully.
Thanks for dropping by this morning!


Hey Mamahen...
I know what you mean. Seafood is almost non-existent in my diet now .
Thanks for stopping by today!