I had never heard of this particular sponge until today, when I found it during my browsing. Of course, I got it from Listverse. 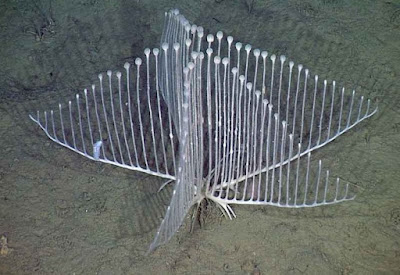 The Lyre sponge (Chondrocladia lyra) also referred to as the harp sponge, due to its shape that resembles a harp, is a little bit different and a little more creepy than your average sponge. It has continued to prove the lengths to which nature will go to survive in inhospitable conditions, and it doesn’t get much more inhospitable than 3,000 meters (10,000 ft) below the ocean’s surface.

The lyre sponge is a candelabra-shaped, carnivorous animal that attaches itself to the ocean floor. Long, finger-like extensions protrude from its veins which can vary in number from two up to six. Small barbs on the “fingers” snare passing fish, which are encased in a membrane and digested. To make things a little creepier, bulbs at the ends of these protrusions contain packets of sperm which are released into the current and absorbed by nearby sponges, which swell after fertilization. It has been less than two decades since scientists first discovered carnivorous sponges. Since then, new species are being uncovered regularly.

You just never know what Mother Nature has up her sleeve, ya know?

Coffee in the kitchen this morning, due to the rain.
Posted by HermitJim at 12:00 AM

Very interesting...47° and windy here this morning so inside it is...I have some fresh baked peanut butter cookies if anyone would like one:))

Amazing to see what Mother Nature provides . Wonder what else is down at those depths.. Cold agin today; it's 42 degrees right now. Mamhen those cookie really sound good to me. Thanks

Hey Mamahen...
I do love those peanut butter cookies!
Thanks for bringing them and for coming over today!

Hey Linda...
Nature sure is full of surprises at times!
Thanks for the visit this morning!

How beautiful, so delicate, so deadly. Yes Mother Nature never stops to amaze me.

You know I'll have coffee where ever and I would love some peanut butter cookies Mamahen!

Hey Jo...
Amazing how She can produce something like this...delicate, yet deadly at the same time.
Thanks, dear, for dropping by today!

Carnivorous? I am always nervous about something that looks at me as meat!

Rain here on the Oregon coast this morning too so my coffee is indoors, but a high surf advisory starts in about an hour.
Nothing like being safe on the beach when BIG surf come in! I have high hopes!!