Turns out that some of our best known authors could do a bit more than spin a good yarn. Some of them, like Twain, were inventors as well!

Funny, but I just can't see Mark Twain as an inventor. I don't know why, but it's hard for me to get my head around! Especially when you see what he got the patents for. Ready for a surprise? 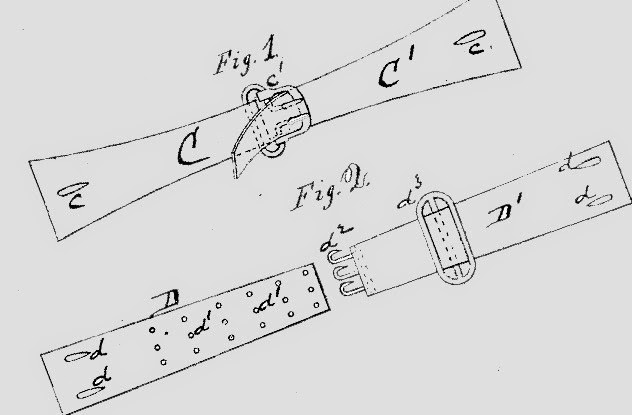 In addition to being one of America’s greatest novelists, Mark Twain held a wide variety of jobs like reporter, prospector, and riverboat pilot. He was also an accomplished inventor, taking out at least two patents during his lifetime. In fact, his first invention netted him $50,000, which isn’t bad, especially by 19th-century standards.

Mr. Clemens’s creation was a new-and-improved scrapbook. Twain loved collecting pictures and newspaper articles, but he got tired of dabbing glue onto each individual clipping. Wanting to speed up the process, Twain devised a self-pasting scrapbook. The process involved adhesive strips pre-pasted to the pages. All you had to do was moisten the sticky stuff, and presto, you were ready to go.
Twain’s most important achievement was a stretchy strap meant to keep loose clothing from falling down. With the help of a handy clasp, the strap prevented “vests, pantaloons, or other garments” from sagging. The device was also detachable, so when changing outfits, you could take it off one pair of undergarments and button it onto the next.

Billions of people still use Twain’s invention, only it isn’t detachable, and it isn’t on vests. The man who wrote Tom Sawyer came up with the elastic-clasp strap on the back of the bra. Somehow I never figured ol' Mark as a scrape book fella, did you? Guess we all need a hobby.

Coffee in the kitchen this morning. Got a few showers coming in!
Posted by HermitJim at 12:00 AM

Now that is interesting! I never would have figured him for inventing either of these...but then I wouldn't have a clue who did lol...Kitchen it is....have a chance of severe stormss here this am they say...

So he was the one man who knew from the start how to defeat the bra strap? Makes sense to me.

I just can't picture Mark Twain pasting pictures in an album. I can see him inventing the elastic strap tho, especially if his clothing would fall down. Raining here this morning also so coffee around the kitchen table is a great idea. I'll bring a coffee cake.

Thank you Mark Twain!!! Terrible thunder and lightning storms last night - more for later today. How about I bring a carrot cake for all?

I would like to curtsy to Mr C. I appreciate the bra strap everyday! I don't think I could handle wearing a 'girdle'!

I just discovered your blog, and I am enjoying my visit--coffee cup in hand.

When you have a moment, grab your coffee cup, come sit on my deck and enjoy the sounds of the birds, the donkey bray, and and crowing of the roosters and whole bunch of other sounds!

Have an excellent day!

Pretty clever man I'd say. There is so much about this man and his mind.

Looks like we may have some sun shine today. The storms have been wonderful. Only going to be in the 90's for a few says.

It's never a problem to gather around your kitchen with good friends.

Hey Mamahen...
Most of the time, we never think that some folks we think of as authors do much else. Human nature, I guess.

Hey Sixbears...
Guess he was a lot smarter than many of us!

Hey Linda...
I had the same problem. Couldn't get my mind wrapped around it!

Always a surprise around the corner.

Hey Phyllis...
We have a carrot cake and a coffee cake! What a deal!

Thanks for stopping by this morning!

Hey Peace...
Sounds to me like the kind of place I would like to spend a little time!

I appreciate you taking the time to join us for a cup! It's always nice to meet new friends!

Don't be a stranger, and thanks for coming over this morning!

Hey Jo...
I reckon there was more to the man than I ever thought. A man of many talents.

I never knew he was also an inventor, especially latches or hooks for women's bras. Just makes me wonder what all research he had to do (grin).