Sometimes the term big, or huge, can't even begin to accurately describe an object properly.

To say that this was one BIG motor would be an understatement. I think you'll agree when you read this story from Listverse. Heck, I can hardly afford gas for my Chevy, so I definitely don't want the fuel bill for this baby! 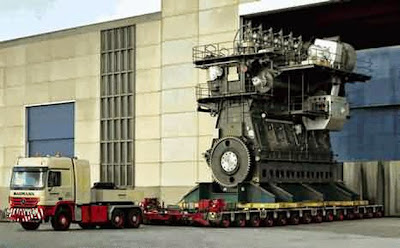 The world’s longest ship, Emma Maersk, is astounding in its own right, with a size comparable to the height of the world’s tallest skyscrapers at 397 meters (1,302 feet). It’s been the record holder for the world’s longest ship since 2007, but it’s the heart of this mighty beast that’s truly staggering. It’s befitting that the longest ship on the planet be powered by the largest reciprocating engine in the world—the Wartsila-Sulzer RTA96-C, an engine roughly the size of a small three-story apartment building.

Without getting too technical, an engine of this size generates 110,000 horsepower and weighs 2,500 tons; compare that to the average horsepower and weight of an automobile engine at 150 horsepower and 160 kilograms (350 lb). Despite being so immense, the Wartsila-Sulzer RTA96-C is incredibly efficient, but nonetheless it still consumes 39.5 barrels of fuel every hour and costs $46 a minute to run.

This, my friends, is one serious engine! I can only imagine what kind of racket this rascal makes when it's running!

Coffee out on the patio today. It's sweater weather.
Posted by HermitJim at 12:00 AM

That's huge. I'd hate to do an oil change on it.

5 degrees here in the north this morning. The coffee can't heat up fast enough.

We are on a warming trend right now but it won't last from what I have seen. Stay warm lets drink lots of coffee. Pass the pot please.

That is one big motor. Sure wouldn't want to be anywhere near it when it runs.

Hey Sixbears...
That would be a job, for sure!

That's way too cold for this old man!

Hey Phyllis...
That would be a really big repair bill, I think.

Many thanks for dropping over today!

Hey Gorges...
I hear ya, my friend! What else can ya say?

Hey Jo...
Coffee will be hot and fresh all day, for sure!

Thanks for stopping in this morning!

Wow!! Now that is a huge engine!! And I thought the top fuel dragsters had big engines. They are only 10,000 hp and the one in your blog is ten times more powerful.