This is something a little different for a Saturday. An airplane mystery! How about that?

This whole story from Knowledgenuts is strange. I would even say that there is something a little suspect about it, but what do I know? Still, I am having a very hard time understanding the story as it exist. Seems to me there are way too many loose ends, know what I mean?


The B-25 Bomber That Crashed In Pittsburgh 60 Years Ago (And Is Still Missing)
By Heather Ramsey on Thursday, August 6, 2015

In 1956, a B-25 Mitchell bomber flying from Nevada to Harrisburg crashed into the Monongahela River in Pittsburgh. Two of the six crew members died in the river. Despite many searches, no one has ever found the plane, fueling conspiracy theories about the purpose of the flight and whether the federal government secretly removed the plane from the water in the dead of night. 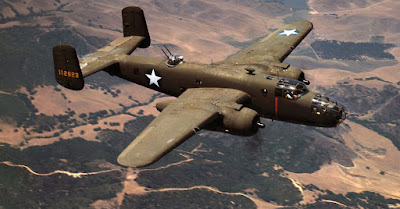 On January 31, 1956, a B-25 Mitchell bomber flying from Nevada to Olmstead Air Force Base in Harrisburg crashed into the Monongahela River (the “Mon”) in Pittsburgh. Two of the six crew members died in the river. Despite many searches, no one has ever found the plane, fueling conspiracy theories about the purpose of the flight and whether the federal government secretly removed the plane from the water in the dead of night.

Produced by North American Aviation, the B-25 Mitchell was a twin-engine bomber designed for use at medium altitudes. In World War II, the plane became famous when US Army Air Force Lieutenant Colonel James Doolittle used it to bomb Japan in 1942. At that time, pilots often flew these planes at low altitudes, dropping bombs from the height of treetops or making strafing runs. Most B-25s were retired after World War II. Throughout the 1940s and 1950s, the few that continued to fly were used for reconnaissance, support roles, or training.

The purpose of the B-25 that disappeared in Pittsburgh is unclear. According to documents that were declassified long after the 1956 crash, the plane was on a routine flight that just happened to pass through Pittsburgh. The pilot deliberately landed in the Mon when it became clear that the plane didn’t have enough fuel to reach the next airport.

What happened next has people questioning the official story. Rescuers safely hauled four of the crew out of the icy water. The other two died. Tugboat captain Carol E. Long helped with the crew recovery that day. Supposedly, he also saw wreckage from the plane taken away by barges. But Long stopped talking after receiving phone calls that warned him not to reveal what he’d witnessed. “He wouldn’t talk to anybody about it,” said his daughter, Cheryl Haberstock, after Long died. “He was too scared.”

Shortly after the accident, an unidentified man called the Pittsburgh Tribune-Review to report seeing a wrecked B-25 bomber at a Dayton, Ohio, air force base. The man stated that he was once an Air Force officer.

Maybe that’s why no one can find the plane in Pittsburgh. In 1976, author Robert Johns and researcher Robert Goerman interviewed some of the surviving crew members and witnesses of the accident. According to Goerman, one crew member insisted there were eight people on the plane, not six as the official report stated. Goerman also said that towboat captains at the scene that day claim the FBI was there and that two uniformed military men without insignia were rescued from the water.

All of these contradictions—and the missing plane—led to conspiracy theories that the B-25 was carrying something top secret, such as a UFO, a nuclear weapon, or maybe a passenger like Howard Hughes. The theories go on to say that the American military covertly recovered the B-25 at night, then transported it in pieces out of Pittsburgh.

Even people who believe the plane is still in the water are stymied. “[The fact that no one can find the plane] is a mystery,” Andrew Masich of Pittsburgh’s Heinz History Center, an organization helping to search for the missing B-25, told TribLive. “There is nothing logical about losing a 15-foot plane in a 20-foot river.” But Masich is convinced that the government didn’t do anything sneaky because reports show that the Army Corps of Engineers and the US Coast Guard tried to find the plane for two weeks after the crash. Once they recovered the crew members, Masich explained, it didn’t make sense to close the river to traffic in a busy industrial city like Pittsburgh.

So how did the B-25 mysteriously disappear in the polluted water of the Mon without being salvaged? Robert Shema of the all-volunteer B-25 Recovery Group believes that the bomber got swallowed by a 14-meter (47 ft) hole at the bottom of the river. Earlier in the 1950s, Dravo Corporation had dug the hole to get fill material for mooring cells, which were used by J&L Steel to secure barges at their loading docks downriver. Over the years, silt has filled about 5 meters (15 ft) of the original hole. Although previous salvage efforts by the Recovery Group were unsuccessful, they now want to dig out some of that silt to see if they can find evidence of a plane. If they do, they’ll attempt to excavate the remains. By now, the plane’s exterior has probably corroded, so the volunteers will search for tires, landing gear, propellers, and engine blocks. The Recovery Group’s 2014 permit application to dredge the river is still pending approval from the Army Corps of Engineers.

Nothing like a little mystery for a Saturday, right?

Coffee out on the patio today!
Posted by HermitJim at 12:27 AM

Labels: Missing plane from the past

Good mystery indeed! If the plane really is still in the river, that would be something. No wonder they can't find a 777 jet in the Indian Ocean.

I was living 30 miles north of Pittsburgh at that time and do remember the plane crashing into the river and disappearing. A great mystery that happened close to me. If only we knew what all else is happening around us. . .

More Government cover up. Quite a story.

Hey Sixbears...
Would be something if they finally found it and told us. I'd like to know the full details just because I'm nosey.
Thanks for coming over today!


Hey Dizzy...
How much do you remember about the crash and the search? Interesting to know how the whole thing was handled back then.
Thanks for coming by today!


Hey Jo...
Never know what secrets are hiding in the past.
Thanks, sweetie, for dropping by today!

To answer your question, Hermit, I was a kid back then just entering my teenage years and there were an awful lot of things that were more important to me, some of which were girls (grin), fishing, etc. Yes, I remember it being on the news but for what all they said about it, I can't remember. It was a definitely a huge news story back then.