I'm sure we have all heard the term "Jim Crow", but was Crow a real person? Actually, he was, but not like you may think.

Sometimes we use a term for a long time, never really knowing where it came from. This history of Jim Crow is an interesting bit of history you might like to know about.

Was Jim Crow a real person?
2014 By Evan Andrews 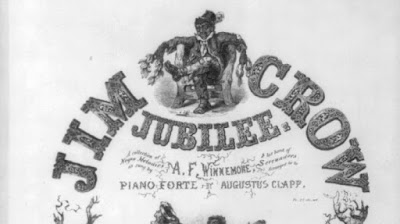 The term “Jim Crow” typically refers to repressive laws and customs once used to restrict black rights, but the origin of the name itself actually dates back to before the Civil War. In the early 1830s, the white actor Thomas Dartmouth “Daddy” Rice was propelled to stardom for performing minstrel routines as the fictional “Jim Crow,” a caricature of a clumsy, dimwitted black slave. Rice claimed to have first created the character after witnessing an elderly black man singing a tune called “Jump Jim Crow” in Louisville, Kentucky. He later appropriated the Jim Crow persona into a minstrel act where he donned blackface and performed jokes and songs in a stereotypical slave dialect. For example, “Jump Jim Crow” included the popular refrain, “Weel about and turn about and do ‘jis so, eb’ry time I weel about I jump Jim Crow.” Rice’s minstrel act proved a massive hit among white audiences, and he later took it on tour around the United States and Great Britain. As the show’s popularity spread, “Jim Crow” became a widely used derogatory term for blacks.

Jim Crow’s popularity as a fictional character eventually died out, but in the late 19th century the phrase found new life as a blanket term for a wave of anti-black laws laid down after Reconstruction. Some of the most common laws included restrictions on voting rights—many Southern states required literacy tests or limited suffrage to those whose grandfathers had also had the right to vote—bans on interracial relationships and clauses that allowed businesses to separate their black and white clientele. The segregationist philosophy of “separate but equal” was later upheld in the famous 1896 Supreme Court decision “Plessy vs. Ferguson,” in which the Court ruled that the state of Louisiana had the right to require different railroad cars for blacks and whites. The “Plessy” decision would eventually lead to widespread adoption of segregated restaurants, public bathrooms, water fountains and other facilities. “Separate but equal” was eventually overturned in the 1954 Supreme Court Case “Brown vs. Board of Education,” but Jim Crow’s legacy would continue to endure in some Southern states until the 1970s.

Isn't it interesting to find these little tid-bits of info about some of our history? I think so.

Coffee in the kitchen again today.
Posted by HermitJim at 12:00 AM

Didn't know the story behind that expression, Mr. Hermit - thanks!

I never heard the expression before, maybe it wasn't used on the east coast.
Coffee Time!

Hey Phyllis...
Funny how we use a term so long before finding out the origin, isn't it?
Thanks for stopping by today!


Hey Jo...
It's been around for a long time, but isn't used as mjuch as it used to be.
Thanks, sweetie, for coming by today!

I thought that Jim Crow was a whisky or the like (grin).

Hey Dizzy...
Almost sounds like it, doesn't it?
Thanks for coming over!