For some unknown reason, folks seem to have always been fascinated with crime scenes, especially those involving murder. This was a very common practice in the early 1900s. Here is the info from Listverse.


Murder in Miniature
The Raree Show 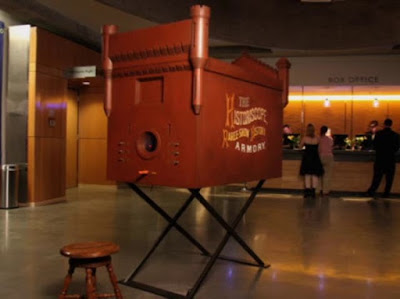 If one couldn’t make it to the murder scene in person, the next best thing was viewing a model at a fair or from a street entertainer. The customer paid the fee, put his eye to a hole in the side of a wooden box, and was able to view a recreation of the crime scene in miniature. The luridly painted backdrops (complete with the victim weltering in his/her gore) could be changed while the operator recited the story of the crime, which might also include the murderer’s hanging. At night, the scenes were dramatically lit with candles. For some reason, nineteenth century newspapers sometimes called these exhibitions, “camera obscura.” These exhibitions remained popular until the invention of the mechanical peep show.

I reckon this was the same thing as slowing down to gander at a traffic accident, such as we do today. Gruesome habit, I think.

Coffee in the kitchen this morning. It's cold outside.
Posted by HermitJim at 12:00 AM

I had never heard of these. I'll pass on them thank you. Inside sounds good. 27° here this morning. Have a good weekend:))]

Never heard of these before. Don't think I need to be looking at crimes scenes tho. Not my cup of tea. Coffee inside sounds great as it is 16 degrees here this morning. Have a great weekend.

Hey Mamahen...
Sounds like you have the cold weather cornered, so I will let you handle it!
Thanks for stopping by this morning!

Hey Linda...
Your temps make mine almost seem toasty at 54.
Thanks for coming by this morning!

I have never heard of these things either. I remember hearing the phrase crape hangers when someone would go out of their way to see something like accidents or murder scenes.

Coffee in the kitchen is fine we are having a damp chili morning here.

Hey Jo...
Always fun to find out about something different about history, isn't it?
Thanks, dear, for dropping by today!

It seems that humans have had a morbid curiosity of violent crimes.