Sometimes folks have to go to great lengths to get an invention noticed. Such was the case in this next story from Listverse. 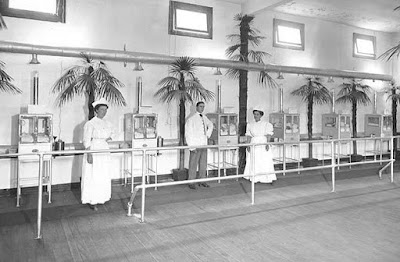 Before the 20th century, premature babies had very little chance of survival. That was set to change when Dr. Martin Corney invented his incubator, but not many people trusted the machine. Hospitals rejected it, and investors were not forthcoming. To prevent the death of his invention and convince skeptics, Couney came up with a very strange and crazy solution. He built an exhibit in which premature babies will be put on display at fairs and parks. The first exhibit, or “child hatchery,” opened in Berlin in 1896. He soon moved to the US, where he opened an exhibit on Coney Island.

Couney’s exhibit looked like a normal hospital. He placed babies in wards and employed doctors and nurses to look after them. The only difference was that one side of the ward was glass, and people watched through it.

The exhibit was very successful. Parents brought their premature babies to Couney and did not have to pay for medical care. The customers were charged up to 25 cents for the show, and the money collected paid for all expenses. Most of the premature children on display survived. By the time incubated babies fairs ended four decades later, Couney had managed to convince everyone that his incubators were safe.

Not a traditional approach, but it seemed to have done the job. That's what counts, I reckon.

Coffee inside again, even though it is supposed to warm up some out on the patio.
Posted by HermitJim at 12:00 AM

And he the saved babies... That was a good story!

Hey Rob...
Sometimes good Karma comes around, right?
Thanks for stopping by this morning!

Thanks to the good doctor I have a sister. She was born two months premature back in 1955 and barely weighed two lbs. Without his wonderful invention I don't think that she would be with us today........

I am so glad he persevered. Prematures babies at least now have a fighting chance to live. Great story. See you in the kitchen and have a great weekend.

This was a great invention. I think PBS did documentury on this. It was out there to do these babie fairs but it worked.

Hey Taminator...
This is one invention that has made a positive impact on many lives, that's for sure.
Thanks for coming over today!

Hey Linda...
I'm glad that he was finally accepted and the incubator made a positive impact.
Thanks for the visit this morning!

Hey Jo...
Sometimes extreme steps must be taken to get the right results.
Thanks, dear, for dropping by today!

I had actually read this before. He seemed to be an incredible man. A bitwarmer here today, but still only in th 40s....Have a great weekend:))

Hey Mamahen...
Hope it gets warmer here as well. I don't like the cold.
Thanks for stopping by today!

That's one more thing I never knew before. Thank you!

It's about 72 degrees where I am today. Cloudy, though. I love November.

Hey Kathy...
Glad to share something new with you. Sounds like my kind of weather there.
Thanks for stopping by today!

It is a well-known fact that Illuminati consist of Multi Millionaires,
Billionaires who have major influence regarding most global affairs,
including the planning of a New World Order. Many world leaders,
Presidents, Prime Ministers, royalty and senior executives of major Fortune
500 companies are members of Illuminati. join a secret cabal of mysterious
forces and become rich with boundless measures of wealth in your company or
any given business, the great Illuminati can make everything possible just
contact : join666cult@gmail.com or WhatsApp +1(646)481-0376 EL
IAI LEXION Thaddeus Iam Vice-President of Citizen Outreach THE ILLUMINATI
ORGANIZATION

BEWARE OF SCAMMERS, THERE IS NO SUCH THING AS REGISTRATION FEE AND YOU MUST
BE ABOVE THE AGE OF 18YRS.
THANKS...