Something that most of us use everyday, but seldom think about...that describes the toothbrush pretty well.

Now you might think the toothbrush is a fairly new invention, but it's been around for a lot longer than most would believe.

Who invented the toothbrush? 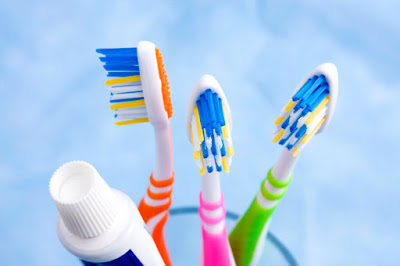 Looking for an innovative dental hygiene enthusiast to thank next time you polish your pearly whites? Turns out it’s not that simple. People have been cleaning their teeth for millennia, starting with the ancient Egyptians, who are thought to have scrubbed their choppers with a special powder made from ox hooves and eggshells as far back as 5000 B.C. The Romans opted for sticks with frayed ends, while the Greeks used rough cloths. About 800 years ago, the Chinese began fashioning proto-toothbrushes by attaching coarse animal hairs to bamboo or ivory handles; during the Middle Ages, travelers brought these devices to Europe.

Fast-forward to the late 18th century, when an Englishman named William Addis landed in jail for inciting a riot. To while away the time—and freshen up in the process—he carved a bone handle, drilled holes into it and inserted boar bristles that were held in place by wire. Addis starting mass-producing his contraption after leaving prison and died a wealthy man. In 1938 the DuPont company developed the first toothbrush with nylon fibers, which proved sturdier and more efficient than animal hairs. But in the United States, at least, it wasn’t until soldiers returned home from World War II indoctrinated with military hygiene habits that brushing one’s teeth regularly became a widespread practice.

So, I have to wonder if the design we have today is the one we will stay with? Knowing how mankind is, I reckon the whole design will change over and over, finally reaching a point where no new designs exist. After all, Man never seems to be satisfied, ya know?

Coffee out on the patio...surprise, surprise!
Posted by HermitJim at 12:00 AM

I have begun to notice a change in the design over the last few years. Not so "bulky" anymore. Also try to find a "hard" bristle - only medium to extra soft. You can tell I am getting old when I don't like things to change. But manufacturers always make changes constantly. They say this helps sales. Nice and cool here this morning - 60 degrees. I'll bring a Kringle for our coffee on the patio.

If you like a harder bristled brush Linda, try one made for cleaning dentures. The kringle sounds wonderful! Save me a seat on the patio!

Bubba -
I had heard that post WW2 is when it became more commonplace for everyone to brush daily. One thing to thank the government for. And grandson Henry doesn't know any other kind of toothbrush except battery operated electric. But I'm sure he gets cleaner teeth than the old fashioned kind.
Linda M - my dentist said I was brushing too hard and recommended a softer bristle ...
Big hugs ~

I have read and seen the early designs but really don't remember the story thanks for the refresher course. I do remember the powdered tooth past but soon after the tube stuff came out. I loved the hard brushes I think they cleaned your teeth and gums better can't find those anymore. Now that I went back and read other comments I'm not alone in the harder bristles. Also have heard about the brushing to hard. Don't know just felt like the mouth was cleaner.

Humidity down here but the heat is way up.

Hey Linda...
I reckon that as we get older, we tend to cling to te same ol' designs. I know I do. Too much change as it is!
Thanks for stopping by today!


Hey Phyllis...
Sounds like some good advise to me. This is why we have discussionsw, I guess.
Thanks forcoming by this morning!


Hey Sis...
Kids today are introduced to a whole range of things we knew nothing about in our day. Let's hope it is for the better.
Thanks for the visit this morning!


Hey Jo...
I thought the powder was pretty nasty. Don't see it around much anymore.
Thanks, sweetie, for dropping by today!

When I shifted to softer bristles about 20 years ago ALL of my gum trouble went away. It was a wonderful event. I am not about to say that is true for all people though.

OK, now I am wondering where that guy who invented the tooth brush in prison got all the raw material that he needed.

Hey Barney...
Guess that's why they make so many different kinds, so everyone can find what works best for them.
Thanks, Barney, for stopping by today!


Hey Dizzy...
Guess it was easier back in those times. He probably could buy a lot of things that wouldn't be allowed now days.
Thanks for coming over today!

Another thing I never considered the oringin of....patio it is...i'm on my way :))