As you know, they did some crazy stuff back in the Victorian days, some of them were not very healthy.

Many of the things done back then could and often did, cause death. Seems almost as if the people of that time wanted to take chances with their lives and health. For that, they paid a terrible price at times. 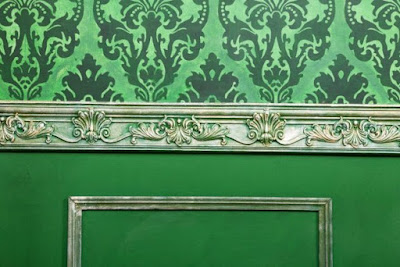 Rather than 50 Shades of Gray, the Victorians were passionate about the color green. In fact, green wallpaper was to the home what an iPad Air is to tablets. This love of green came about because of the end of the window tax and gas lamps. With natural light flooding in during the day and better light at night, the Victorians unleashed their inner passion for bright colors.

The fashionable color to dress the walls with wasn’t just any green. It had to be a lush shade called Scheele’s Green. Not only was it bright, but it resisted fading—an extra boon. The dark side of this colorful wall dressing was that it slowly poisoned people. Copper arsenite, an arsenic derivative, gave it the rich color. Breathing air polluted with arsenic vapor had the potential to kill . . . and often did.

Whole families ailed and died, with children especially at risk. The signs of arsenic poisoning were similar to diphtheria, so many politicians remained skeptical of the danger. And those doctors who did voice concern about arsenic were often publicly ridiculed, especially by companies producing the wallpaper!

It took until 1903 for arsenic compounds to be forbidden as a food additive, but the use of arsenic in wallpaper was never formally banned.

I took this article from Listverse. If you want to read about some other deadly things done in Victorian times you might go check it out.

Coffee out on the hot and muggy patio this morning.
Posted by HermitJim at 12:00 AM

Very interesting. Good thing I don't have wallpaper in my house. Hot and muggy here also, so I guess I would rather sit on your patio with all my friends than sit here alone and sweat.

Hey Bigfoot...
You are certainly welcome.
Thanks for stopping by today!


Hey Linda...
I reckon it's hot and muggy just about everywhere. We can all suffer together.
Thanks for coming over today!

I thought for a minute it was going to say it caused people to go insane and drove them to kill themselves and others. If I had to look at that every day I'd sure go crazy. But this is an interesting bit of news.

Yes hot and muggy here too, so like Linda said at least on your patio good friends can suffer together

i love the color green, but not that much!

Bubba, I don't have any wallpaper or rooms painted green, so I guess I'm in the clear for now, whew!
Very interesting article, but I, like your other followers, have come to depend on you for that. Well done ...
Big hugs ~

Sadly they also used it in dyeing fabrics and some gorgeous dresses were made. I can only imagine how sick the ladies got that wore them.

I would imagine these Victorian homes didn't have very many mice either.