Here is another mystery from our friends over the pond at Scotland Yard.

This mystery isn't as much fun as the missing gold case, but it remains a mystery yet unsolved just the same. As of yet, the mystery remains unsolved.


The Case Of The Severed Finger 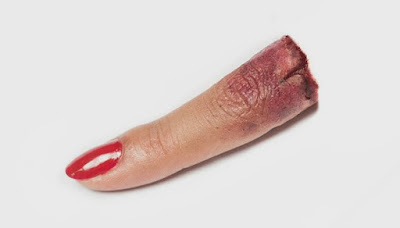 Unable to identify a man who lost a finger in 2010, Scotland Yard appealed to the public for information.

A dog discovered the digit in an abandoned shop in Woburn Walk on December 4. No other remains were found in the vicinity. Initially, police thought the finger might have been blown from the victim’s body as a result of the July 7, 2005, terrorist bombings at Aldgate. Fifty-two people were killed in the London attacks that day.

The shop in which the missing finger was found is near the location where suicide bomber Hasib Hussain detonated his bomb on a double-decker bus. Analysis of the DNA of Hussain’s victims and survivors proved that the finger did not belong to any of them or to any missing persons.

When asking for the public’s help, Scotland Yard’s Detective Constable Tom Boon admitted the case was “quite the mystery.”

Of course, the picture that I have on the post is of a woman's finger...unless the man was wearing fingernail polish. This article is from the folks over at Listverse, so who knows?

Coffee inside the kitchen this morning. Too hot to be going outside right now.
Posted by HermitJim at 12:00 AM

Such strange goings on. With all of our modern technology and we still have unsolved cases like this one. Good one for a Monday.

A mystery indeed, especially if they couldn't get a fingerprint. Almost all of us have fingerprints on file somewhere.

Hey Linda...
Guess we will always have some cases that defy explanation. Keeps things interesting, that's for sure!
Thanks for stopping by today!


Hey Momlady...
Yes, we do. Even the Hermit has prints on file, believe it or not.
Thanks for coming over today!

Yes like Linda said with all the new technology you would think they would be able to ID this by now. I'm trying to remember if I have had my finger prints taken at some time.

I with you in the kitchen for coffee between the heat and humidity.

Hey Jo...
Here's hoping they are not that tech challenged. I would be surprised if you hadn't.
Thanks for dropping by today!

Surely by that date, Scotland Yard and/or Interpol had a large file of fingerprints on file. But, I suppose, some where able to slip through without their fingerprints taken.