Somany sea faring mysteries still exist out there, it's hard to pick another one to think about. Here is yet another still unexplained. 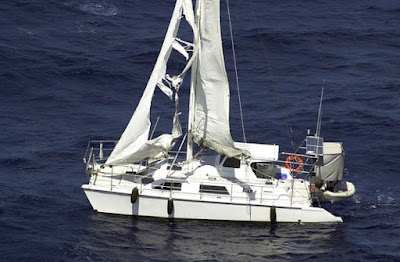 The Mary Celeste has gained a somewhat eerie notoriety following its discovery, apparently having been abandoned by its crew, with nobody remaining on board. This ghost vessel phenomenon seems to repeat itself, remarkably, in the modern case of the Kaz II.

In April 2007, the Kaz II was traveling with its three-man crew along the northwest Australian coast, when air surveillance noticed it drifting oddly. Upon boarding, no trace of the crew members could be found. However, no sign of trouble was discovered either. A laptop computer was still running, and the engine was on. Eating utensils were laid out on the table, while life jackets remained in their cases. The bizarre and disturbing mystery of the Kaz II essentially remains unsolved.

According to Jon Hall of the Queensland Emergency Management Office, “What they found was a bit strange in that everything was normal; there was just no sign of the crew.”

The state coroner eventually ruled that “the brothers fell overboard while attending to mechanical problems—however, the ruling is still only speculation.”

Considering how much of our planet is covered by ocean, it's no surprise there are so many mysteries connected to the sea.

The Aliens took them Hahaha

Yes another very strange boating mystery. Don't they have those huge great sharks out there, so if they did fall over board they must have been eaten. Heck I don't know.

Coffee out on the patio sounds great. 55 degrees here this morning.

Hey Jo...
One of those things I reckon we'll never know.
Thanks for dropping by today, sweetie!


Hey Sis...
Seems to be a popular choice!
Thanks, sis, for coming over today!