Coffee And The Civil War...!

Seems as though coffee played a much larger part in the Civil War that we might have thought.

This story from Listverse shows exactly what I'm talking about. Not a pretty story, if you ask me.


The Union Was Obsessed With Coffee 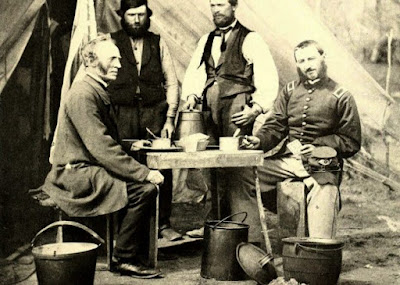 For the Union, coffee was a big deal. In fact, the word “coffee” shows up in Union letters and diaries more often than any other word—including words like “war,” “bullet,” “Lincoln,” and “mother.”

Coffee was a more regular part of soldier life than fighting. Every soldier was given a ration of 16 kilograms (36 lb) of coffee per year, and they drank it every morning. One rifle company even made a rifle that had a coffee grinder in the stock. Since most troops only fought two weeks per year, the coffee grinder ended up being used more than the bullets.

The Confederates, on the other hand, hardly had any coffee. Union blockades kept the Confederates from getting their daily caffeine fix. Some Confederate soldiers were so desperate for a java fix that they would brew potatoes and rye until they turned black, just to have a caffeine-free, bitter drink that the soldiers could pretend was coffee.

Caffeine actually made a strategic difference in the war. One Union general would time his attacks based on when his men were most buzzed on caffeine, convinced that the extra rush from coffee gave his men a fighting advantage.

On top of everything else, not having some coffee for comfort food must have made things even seem worse for the troops of the South. By itself it's not a big thing, but must have been really bad for troop moral.

Coffee in the kitchen this morning, but that's due to the fact that the rain has finally decided to pay us a visit!
Posted by HermitJim at 12:00 AM

Labels: coffee and the Civil War

I never knew or thought about how important coffee was in those days...wow! Glad you got some rain. The kitchen will be fine:))

My breakfast of champions. Two cups of coffee and five cigarettes. Gotta have it. Can't do without it. Giving up the cigarettes this weekend, though as a Father's Day present to myself..............

Don't know how I could wake up without my cup of coffee. I think I would have a panic attack. Glad you are finally getting that rain. We are supposed to get some this weekend. Have a great weekend.

My morning coffee is important, I tried tea for the caffeine (many years ago) but my stomach was not happy.

Hey Mamahen...
I never thought about it much until I read this article.
Thanks for stopping in this morning!


Hey Taminator...
Believe me, I know exactly what you mean!
Thanks for coming over today!


Hey Linda...
I reckon that a panic attack would be in order.
Thanks for the visit today!


Hey Rob...
In my opinion, tea just can't replace coffee for a jump start in the morning.
Thanks for stopping by this morning!

Another lesson learned here at your place, I never knew about the coffee being so important to those guys. Can't blame them much we all know how much it means to us.

Its ugly and grey here today they say we will get rain but I'm sure it will just pass us by. But at least the Mountains have been getting good steady rain since Wed.

Hey Jo...
I know that I don't want to go into battle without my morning cup of java, that's for sure.
Thanks, dear, for dropping by this morning!

I'm a coffee in the morning and tea in afternoon/evening drinker. However when I'm sick I drink tea all day..white, green, mint, and all kinds of herbal teas out there. I collect them and drink them. My favorite is the ones my daughter picks and harvest from the wild called Navajo Tea.

Another reason why the South lost the war, huh, Bubba?


I'll join you in the kitchen for a cuppa. Rain nowhere near this side town, darn it!