How About Those Stump Houses...?

We all know that coming up with adequate shelter was probably one of the hardest endeavors for the early pioneers. In some cases though, they did have a little help by using the leftovers from logging operations.

Early Settlers In The Wild West 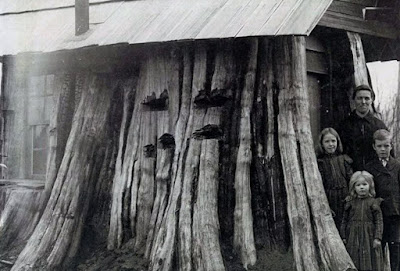 After loggers swept over the old-growth forests of the Pacific Northwest in the late 1800s, many pioneers were just coming across on wagon trains to settle down with their families. To their surprise, these early settlers discovered a mauled landscape dotted with enormous, towering tree stumps that the lumber companies had left behind.

Some of these sturdy stumps were 3 meters (10 ft) tall. These old logging sites that had cleared the forest seemed perfect for farmland. So some of the thriftiest pioneers had the wise idea to homestead these areas. They settled in what became known as “stump homes.”

[10]Basically, all the settlers had to do was put a roof on top of the stumps and attach a door. While some lived in these homes with their families, others used them for storage or chicken coops.

For some stumps that remained on the property, the pioneers came up with other creative uses. Some were leveled off at the top into flat platforms where the people would have social gatherings, like “stump dances” to folk music. One of these stump homes became the first US Post Office in the remote Olympic Peninsula, and it still stands today as a historic landmark.

This is a case of making lemonade when life gives out lemons. At least all those stumps could be used for something, right?

Wonder what it was like. Did they cut in windows? Were there bugs? Guess one uses what one can with what materials are there.

Those were some very creative people back then. Like you said, "if life gives you lemons, make lemonade".

Hey Momlady...
I was sorta wondering about those same things. Especially the windows part.
Thanks for stopping by this morning!

Hey Linda...
Guess back then you had to be creative or do without.
Thanks for coming over today!

The picture shows a window which surprised me. People knew how to survive back then.

Patio time sounds good to me been running around like crazy already this morning.

Sounds ingenious to me - the original tiny home maybe.

I would guess that those huge stumps were hollow. If not, it would take way too much work removing all that wood from the middle. Those people were smart using what nature had provided. Sure beats cutting down a lot of trees to and sawing them up to build a home. I believe that if there is an easy way to do something, got that route.

I think it would be interesting to have one of those stump homes, as a vacation cottage. I'm sure it wasn't as easy as it sounds though, to turn a stump into a home.

Hey Jo...
Guess it was make do or perish. Glad they chose to make do.
Thanks for dropping by today!

Hey Sis...
Now that's certainly a thought. Not mobile, though.
Thanks for coming over today!

Hey Dizzy...
I was wondering about that myself. Seems like they would certainly need to be hollow, doesn't it?
Thanks for the visit today!

Hey Mamahen...
Must have been a decorating nightmare.
Thanks for stopping by today!