You wouldn't think that something as common as breakfast cereal would ever cause a controversy, but it has. Some of the controversy goes back to a time long ago. 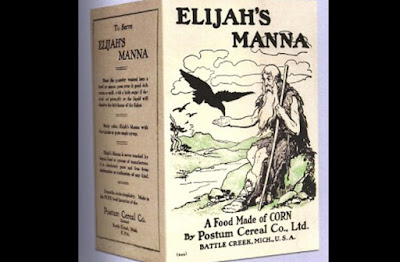 Cereal controversy has gone on as far back as the 1800s.

Seventh-Day Adventist Dr. John Harvey Kellogg and his brother, Will Keith Kellogg, were trying to develop a food that went with their church-recommended vegetarian lifestyle to feed patients at their sanitarium. They would not go on to officially market corn flakes until 1906, which allowed a former patient, C.W. Post, to take his own stab at the idea.

After C.W. Post finished creating Grape Nuts, he decided to try his own take on corn flakes that he would call Elijah’s Manna. This began a major controversy, with clergymen denouncing the product as sacrilege, and Britain even barred it from being imported into the country. Though Post tried to defend his brand, he eventually gave in, and in 1908, the cereal went on to become Post Toasties.

Some of these controversies seem a bit much to me, but what do I know. I'm more of a bacon and eggs person myself.

Coffee out on thew patio again today!
Posted by HermitJim at 12:00 AM

I just saw a story on TV on the development of Corn Flakes and how they came about. Very interesting story. Would you believe it is raining again. Hahaha Better get my Ark built real soon.

I imagine most folks don't know the origin of whatever cereal they eat. The Kellogg story is an interesting one.

I stopped eating cold cereal when milk started disagreeing with me.

It was coffee & oatmeal with a banana (no milk) on the porch this morning. Mid-60 & feels a touch humid here in north Georgia this morning.

I found this very interesting.

Hey Linda...
I think most history of breakfast food is interesting and informative.
Thanks for coming over this morning!

Hey Momlady...
I agree that Kellogg's story is interesting, for sure.
Thanks for stopping by today!

Hey Rob...
I prefer oatmeal myself, as well.
Thanks for the visit this morning!

Hey Mamahen...
Glad you found it so.
Thanks for stopping by today!

More things I didn't know and now I do. Interesting how they didn't like the name of Post's cereal and the story of the Kellogg brothers. Used to eat cereal but now I like a nice warm breakfast to start my day.

See you all on the patio

The way I eat cereal is a little different. I put about five spoonful's of plain yogurt in a bowel and sweeten it with some sugar. Then I add Cheerios and Honey Bunches of Oats and finally put some cranberry juice in it, instead of milk. I love it that way.

Hey Jo...
I really prefer a hot breakfast as well. Just taste better, in my opinion.
Thanks, dear, for dropping by today!

Hey Dizzy...
Sounds like you have it all figured out. Probably good for ya as well!
Many thanks for coming by today!

I'm going for the bacon and eggs my own self.

Hey Sixbears...
Man after my own heart! Yeah for bacon and eggs!
Thanks for stopping by today!