I don't know if any of you have ever had an "imaginary friend", but it isn't unusual for youngsters to create one. Normally this isn't a problem, but it could become one at some point.


The Boy In The Closet 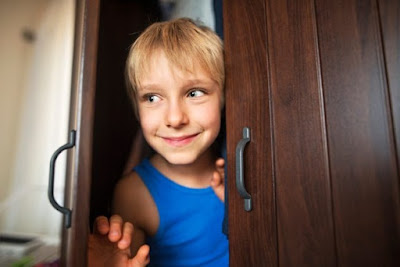 When three-year-old Rebecca started talking about her new friend called Jonathon, her parents didn’t take much notice. Even when she became obsessed with her closet and told her parents that Jonathon was in there, they didn’t think anything of it. After all, many toddlers have imaginary friends, and Rebecca would soon grow out of the notion of it.

Then, Rebecca’s mom fell pregnant again, and the family opted to move to a bigger place that would accommodate their new baby. Rebecca moved on from her imaginary friend, and her parents soon forgot about it completely. Four months later, the new owners of the family’s old home contacted Rebecca’s father. They had found a trapdoor in the back of Rebecca’s closet, and below the trapdoor, there was a hole with a box in it.

The box contained baby pictures and baby clothes. On the box was written: “Jonathon’s.”

I picked up this article from the folks over at Listverse. Interesting, don't you think?

Coffee inside once again this morning.
Posted by HermitJim at 12:00 AM

Wow...I had a brother that died of crib death at about 5 months old. Fast forward about 35 years, and my daughter who was about 3 yrs old n I were at the cemetery getting ready to decorate the graves. I had the flowers sitting on the hood of my car, when all of the sudden a fat of yellow flower that was in the center of the row went crashing to the ground. My daughter looked at me and said, Sonny Boy doesn't like the yellow ones. To this day over 30 yrs later, I don't put yellow flowers on my brothers grave. My daughter would also often not go down the hall to the bathroom or bedrooms in our home, because she said the man with black clothes was down there and he scared her.

Wow, that is creepy. You hear about such things happening. Still very creepy.

Hey Mamahen...
Now that is pretty scary. Gives me goose bumps!
Thanks for stopping by today!

Hey Linda...
Creepy is a good word for it!
Thanks for coming over today!

WOW That is creepy. But they say it happens and people have seen such things. Who knows

Coffee in the kitchen with good friends is always fun

Hey Rob...
Exactly!
Thanks for the visit!

Hey Jo...
Many mysteries in this world of ours, that's for sure.
Thanks, dear, for dropping by today!

Hey Sixbears...
I certainly hear ya on that, brother.
Thanks for the visit today!