I find it interesting just how many mysteries remain unsolved even after years of study and research. Such is the case of the person known as Leatherman. 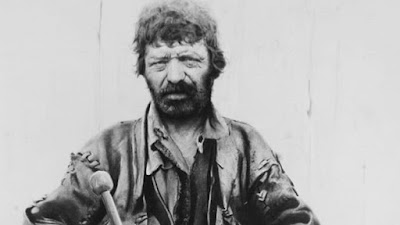 Historian, Dan DeLuca, spent most of his life researching a deceased homeless man’s life. Ever since he stumbled upon his grave in the Sparta Cemetery in Ossining, New York, DeLuca had been fascinated with the man known as Leatherman. He learned that the inscription on Leatherman’s gravestone incorrectly referred to the deceased as Jules Bourglay of Lyons, France. He also knew that Leatherman had been a source of mystery for people in Westchester County and western Connecticut since the 1850s.

Leatherman was said to have had a strange ritual which contributed to much of the speculation surrounding him. Once a month, he would walk 360 miles between the Hudson and Connecticut rivers. Being homeless, he was dressed very modestly in patchwork garments and wooden shoes and very rarely spoke to anyone. He slept in the forest and sometimes in caves, but he would never stay inside a building for more than a couple of minutes. He often asked for food as he passed by a farmhouse and the occupants were amazed at his appetite. He could eat a staggering amount while remaining standing at the front door.

The press began following Leatherman’s movements and chronicled his travels for over 30 years. In modern times the research into this mysterious man continues. Pearl Jam got caught up in the mystery and wrote a song about him. Leatherman’s real name and age at that time remains unknown, as does his place of birth and where he grew up.

It's a bit sad that after so many years, this man's real name isn't known. However, he isn't the first unknown person in our history and more than likely isn't the last. Part of our human condition, I reckon.

It is sad that no one ever found out more about him while he was alive...I'm on my way to the patio:))

Hey Mamahen...
Yes, it is.
Thanks for stopping by today!

I wonder where they came up with name on his head stone? Yes so many homeless on the streets with mental illness in this country is so sad.

See you on the patio

Hey Jo...
There is no telling where they got the name.
Thanks, dear, for dropping by today!

Maybe he chose to remain anonymous. Some people just like to be left alone to pursue their own way of life, like this fellas' trek. We'll never know.