A Good Friend Is Missing...!


I have some sad news today.

For those of you that don't know about my cats, I had two male Siamese. I got them when they were kittens, and they became my friends and my "roomies".

One was a lot bigger than the other...and the biggest was named Smokey, mainly because of his coloring. He was mostly gray at the ears and face. Smokey was a really big cat, which was not usual for cats of Siamese blood. In fact, Smokey reminded me of a panda bear!

His brother was named C.B. (short for cry baby) because he is always talking and carrying on, especially when he first comes in after being outside! C.B. has a more natural Siamese coloring...black along the face and ears, slim and lanky in build!

Both of these wonderful creatures were more people friendly than anyone could imagine. They loved being around people, even children. They showed no fear when it came to being around most folks, only hiding when the yard guys came around! For some reason, they did not care for lawn mowers and leaf blowers! Too noisy , I guess!

Anyway, both the boys liked staying outside at night, prowling and carrying on like Toms are prone to do. They were always glad to come in first thing in the morning, always glad to see me, would get up in my arms, and give me a hug before they devoured their morning rations of cat food and fresh water! They were a lot company...and a true pleasure in my life!

Below is a picture of Smokey taken last Summer. As you can see, he was indeed a handsome guy! 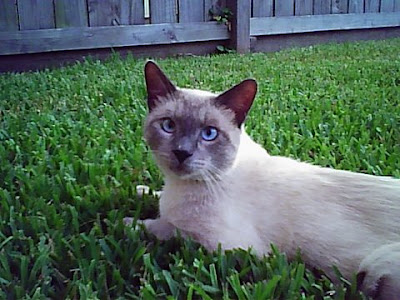 Smokey is no longer here. After spending the night out five days ago, I went to let the "boys " in and when I opened the door, in came C.B....all alone! I figured that Smokey was going to hang outside just a little longer, but he would soon be home. He does NOT like to miss a meal, believe me!

C.B. started talking to me, looking all over the room and the yard...calling to his brother the whole time! Neither of us had any luck, I'm afraid.

I can only assume that someone has taken him in and adopted him. If that's the case, sooner or later they will have to let him out...and I'm hoping that when they do, he'll come home. Anyway, I would like to have him home. I miss him, and his brother misses him! I feel that a part of my family is gone. I know that I profess to be a Hermit, but my "roomies" are very important to me and I don't feel really complete with one of them missing, ya know?

Now, my friends, let's get some fresh coffee and sit in the kitchen, OK? I'll show you some more pictures of my boys...!
Posted by HermitJim at 12:05 AM

Labels: my buddy is gone

My grandmother had a cat that was "owned" by several people -- unbeknownst to each other. He would be gone for several days then just show up. I hope your friend comes home soon.

Chopper, a cat from down the street, has at times disappeared only to reappear with a collar not given to him by his owners, so I hope the same is true of your pal.

The cottage by the Cranelake said...

I´m so sorry about Smokey! I hope he´ll come back real soon!

I´ve been away on hip surgery the last week myself. I´m a bit tired and I have no chance on keeping up with all blogs I usually follow at the moment. But I´ll be back :-)
Take care and keep Ypur eyes open for Smokey!
Christer.

I hope he comes home, Jim. Have you thought of posting his picture at the local vet clinics? I think you're right that someone took a fancy to him and has him in their house. But sooner or later, they will take him to a local vet for shots. That's a really good picture of him and any vet worth his salt will let their client know they have 'found' someone else's beloved pet!

I hope he comes home.

Jim, I hope he shows buddy.I know ya can get really attached to critters.Good Luck.

I'm soooooo sorry to hear about Smokey, Jim!! I know some people won't get it...but those little fur balls become our babies!
I sure hope he comes home soon...the way cats do...all unapologetic...looking for his food...like nothing has happened! LOL
Hugs to yah,
Cath

Sorry to hear Smokey's missing. I really hope he returns soon. I know how attached a person can get to an animal; they are very loving creatures.

Good Morning My Special One, I am so sorry to hear Smokey is missing. My daughter has a cat that will take off for a week sometimes and comes home looking pretty bad. Skinney and dirty. I guess just being the man of the neighbor hood. I hope he comes home soon I know how much u love those roomies.

I sure hope Smokie shows up soon. I know what it's like when one of your kittehs decide to go walkabout. My thoughts are with you and I'm sending messages out into the universe for him to come home.

Hermit, my thoughts and prayers are with you and Smokey. I also know what its like when one of our critters goes missing. Lets not write him off yet. He'll be back. Check the local Vets and your ASPCA, someone might have found him and taken him there. When my two dogs took off years ago, I even called the police, I was so frantic. They were found 2 miles away. Cretons, worried me sick. Hang in there buddy.

Ah, Hermit. That cutting pain when one of our fur buddies is gone. I feel for you. I hope he comes back to you safe and sound. I've had lots of Toms--and they always roam and ramble and fight and come back for food and sleep. I hope Smoky does too. God Bless,
HM

As the others have said. I too hope he returns soon.

Dang IT!!! I just hate it when one of our fur babies puts us through this worry. I am a cat person also Jim and I know exactly what you are going though. I of course wish you the best outcome for Smokey's return. Visit all the local Vets and contact the Animal Control with a picture and info in hand.

I remember quite some time ago a cat I had went missing for about a week or more if I remember right. Right about the time we gave up hope she returned home again. I would'nt give up hope just yet Jim. I hope he makes it back soon.

...quick prayer out for your lost roomie,keep the faith,he'll make it back...

I, also, hope Smokey returns soon. He is one beautiful kitty. I love cats and always hated to lose one. Have only one now and keep her in the garage at night as we have a bountiful crop of coyotes here lately.

Awww, Hermit Jim! I know exactly how you feel, and with 7 and a half of my own, I know what they can get up to when they get half the chance! And I know what they can MEAN to you as well... the little buggers.
Have you tried notices on telephone poles and the like?
I'll say a prayer for the 3 of you, okay? And please keep us informed?

Jim, He is a very beautiful animal. Its devastating to lose a friend. Reading your blog from the beginning, I wonder: did you find your place "in the sun'? I hope so. Call me ;>) and I'll come see you in peace and serenity. Lucky you.

I am so sorry to hear of Smokey's disappearance. It is never an easy thing to cope with when one of our fur-babies goes missing. They really do have a special way of weaving their way into our hearts and becoming family.

Like all the others that have commented before me, I wish for his safe return. Please keep us updated.

I will keep y'all in my thoughts and prayers.

I hope your roomie shows up sooner rather than later, we have a pair of inside only cats (Siamese female, Burmese male) and they are quite like family. When we go on vacation, we miss them and we get a 'Where in the World were You?' reception when we get back. Prayin' for good news soon.

I hope Smokey is home as I type this. I'm so sorry that he is missing! My mom hated cats until our first cat - a male siamese that we named Goliath - adopted us. His funny antics and loving (and aloof) personality opened the door for a few other cats. Jim, hang in there, my friend. I'm sure Smokey will be home soon.

I knew of a cat that lived with a neighbor of its owners for about 5 years before they found out, when the neighbors thought they had taken in a stray. Hope that someone is being kind-hearted to Smokey and that he shows up soon!

So sorry that Smokey is taking so long to come home. :( Here's hoping that he will be reunited with his brother and you real soon. (if not already!)

Jim, I have a big orange tom named Cheddar-Bob and I hate to loose. In fact I'm petting him right now. I hope you find him and find him safe.