Ol' Henry couldn't decide weather to be a good guy or a bad man, so he became both.

I have to wonder why people kept on putting him in office, given his background and all. Just no accounting for some people's common sense, I reckon. 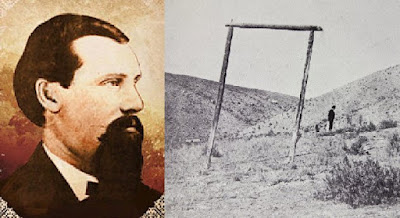 In 1856, Henry Plummer was elected sheriff of Nevada City, California and served two terms before he was convicted of second-degree murder for killing his mistress’ husband. Having served only six months in San Quentin before being pardoned by the governor, Plummer returned to Nevada City, this time he was elected to Assistant Marshal. Avoiding prosecution for killing a man in a whorehouse brawl, Plummer fled in 1861, ultimately settling in Idaho where he took up with a gang of highwaymen.

Due to his influence, the gang became known as “The Innocence” who robbed and murdered travailing miners. In 1863, “The Innocence” followed Plummer to Bannack, Montana, where he was elected sheriff. While in office, Plummer ran an effective and deadly criminal ring, providing his henchmen with the routes of gold shipments, as well as their protection, all the while the gang ran rampant in Bannack without the fear of ramification. After the robbery and murder of more than 100 locals, a team of nearly 2,000 settlers turned vigilantes captured and hanged a weeping Plummer and two of his men on the same gallows the crooked sheriff had prepared for another.

Seems like Henry must have been a good politician, or else he wouldn't have been elected as often as he was. Probably should have remained on the side of the law. It would have been better for his health, for sure!

Coffee in the kitchen this morning. Freshly baked sugar cookies are available.
Posted by HermitJim at 12:00 AM

This is where common sense, referrals and a background check sure would have helped. Glad the 2,000 citizens finally got the courage to string him up. Still very cold here; thanks for the cookies.

Hey Linda...
Guess they didn't use any of those when hiring Henry. I wonder if he was elected or appointed?
Thanks for stopping by this morning!

He certainly was a character, but paid for it in the end. I think your right he should have stayed on the side of the law.

I'm going to bring some dunkin coffee today to go with your cookies.

Hey Jo...
Donuts are always a good thing! Can't have too many treats around for the coffee bunch.
Thanks for dropping by, sweetie!