Many of our legends and ghost stories have their origins in the tales of the native people of our land. Just stories...or should we pay them more heed? 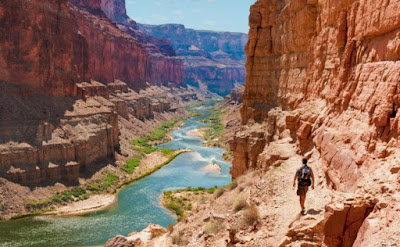 Grand Canyon National Park is perhaps one of the most famous parks in the world. With just under 5,000 square kilometers (1,930 mi2), the canyon is riddled with mysteries and folklore.

One of the tribes that inhabited the canyon was the Hopi, comprised of elders, workers, and hunters. They thrived there, with some writers speculating that the tribe had built an underground citadel within the canyon.

The Hopi believed in the god Maasaw, the supposed keeper of death. Maasaw is said to reside in a specific region of the canyon. If you see strange lights coming toward you from within the canyon at night or you hear a faint tapping of rocks, Maasaw is after you.

While this sounds like superstitious nonsense, many have experienced nausea and anxiety in the region shortly after hearing the rocks clanging. Although the area is level and not considered to be dangerous, a large number of accidents have occurred there.

I've never been to the Grand Canyon, but I'll have to take the word of the article. I found this info over at Listverse, if you are interested.

Coffee outside again this morning. I'm liking this warmer weather!
Posted by HermitJim at 12:00 AM

The Grand Canyon is a great place, pictures do not do it justice. If you ever get a chance you ought to stop & take a look.
This the first time I've heard of spirits there, something new. Thanks!

This is one place hubby has always wanted to go...maybe some day.

I have been to the Grand Canyon but this is the first time I have heard of that legend. I do remember hearing about Massaw when I went to the 3 Hopi Mesa's. Very interesting. Coffee outside sounds great. save my spot on the swing.

The Grand Canyon is awesome and that doesn't begin to describe it.

Hey Rob...
Glad I could be the first to report it to ya
Thanks for stopping by today!


Hey Mamahen...
I hope he gets the chance to visit there.
Thanks for coming over today!


Hey Linda...
Glad you found it interesting.
Thanks for the visit today!


Hey Momlady...
That's what I've heard. Maybe I can go someday!
Thanks for stopping by today!

I have been to the Grand Canyon and pictures tell nothing of the beauty. I have heard of the underground world as they called and maybe that is the word they used. But nothing about the tapping was anything I ever heard or read about. If you can go My Friend you should.

Coffee out on the patio sounds good. We are at 60 this morning and I slept with the ceiling fan on.

I'm not sure where you are Mr hermit but the Grand Canyon village is only a 19 hour drive from Houston, TX

Never heard the tapping of rocks there, but the glass walkway on the Indian owned side of the canyon gives a completely different perspective than the west rim where most visitors go.

The world is full of unsolved mysteries. That keeps it interesting.

Hey Jo...
I have heard from several people that ver same thing about the pictures not doing the canyon justice.
Thanks for dropping by today!


Hey Rob...
Actually, that's not a bad drive for me. Thanks for the info.


Hey Sis...
Actually, I'm glad you didn't hear the tapping of the rocks. I can only imagine the view from a glass walkway.
Thanks for coming by today, sis!


Hey Sixbears...
You certainly have that right, sir. It surely does.
Thanks for the visit today!