Many untold mysteries over time have gone completely unanswered, and remain so to this day. Here from Listverse is yet another. 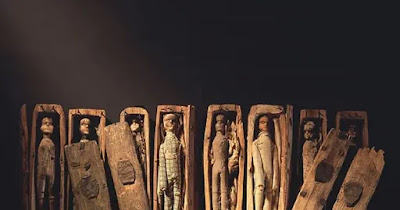 In 1836 a group of boys set off for Arthur’s Seat in Edinburgh, Scotland to hunt rabbits. Intrigued by a concealed cave, the boys decided to peek inside. After pulling away the stones covering the entrance, they stumbled upon 17 miniature coffins, each with a wooden doll inside. The dolls had big eyes and were dressed in cotton clothing.

When the discovery was reported in the Scotsman newspaper, the article mentioned that the coffins were decorated with funeral trappings and it seemed that they had been placed inside the cave recently.

As is always the case with unexplained discoveries, multiple theories were presented to try and explain the coffins. Some people thought it might be children playing a trick, while others mused that witches might have used the coffins for rituals. Yet another theory said that the coffins may have been part of an ancient custom to give sailors who died at sea a Christian burial. A dark theory suggested that the coffins may have been set up in tribute of killers William Burke and William Hare who murdered 17 people.

The true purpose of the coffins and who placed them in the cave remains a mystery.

You would think after all this time, someone would have discovered the reason for the miniature coffins. One more unanswered tale of mystery, I reckon.

Coffee out on the patio this morning.Temps are supposed to be in the 70s.
Posted by HermitJim at 12:00 AM

How strange and a bit frightening. 70s and the patio sounds wonderful:))

Hey Mamahen...
I sure agree with your assessment.
Thanks for stopping by today!

That is a good mystery for Monday.


A bit chilly right now but should warm up into the mid 80's but starting tomorrow not so nice lots of thunder and rain for 3 days. Patio sounds great to me

Hey Jo...
Glad you liked the mystery. I got tired of the rain, but now we are getting a bit of sun...that's a good thing.
Thanks for dropping by today!

Hey Rob...
It's either that or talking about politics. This is a better choice, I think.
Thanks for the visit today!

What a discovery! Imagine being one of those boys... that's a sight that one can never forget. Thanks for this tale!

It is a well-known fact that Illuminati consist of Multi Millionaires,
Billionaires who have major influence regarding most global affairs,
including the planning of a New World Order. Many world leaders,
Presidents, Prime Ministers, royalty and senior executives of major Fortune
500 companies are members of Illuminati. join a secret cabal of mysterious
forces and become rich with boundless measures of wealth in your company or
any given business, the great Illuminati can make everything possible just
contact : join666cult@gmail.com or WhatsApp +1(646)481-0376 EL
IAI LEXION Thaddeus Iam Vice-President of Citizen Outreach THE ILLUMINATI
ORGANIZATION

BEWARE OF SCAMMERS, THERE IS NO SUCH THING AS REGISTRATION FEE AND YOU MUST
BE ABOVE THE AGE OF 18YRS.
THANKS...

Dear Friends and Family,
It is with a heavy heart that I inform you that on Monday, March 15, Hermit Jim passed away. I'm writing on behalf of his family - his sister asked that I let you know. Although he hadn't been blogging much, of late, he valued this connection to you - his blog, and the people who read, followed, commented on, and shared it were as much a part of him as coffee, cats, and a wry laugh at the world we live in.

He will be missed.

I really like the blog and I hope people will have a new blog, thanks for the blog
ចាក់បាល់​ Kick the ball