How About Some Toast...?

You wouldn't think that something as simple as toasters would have such an interesting history, would you?

Like so many other things we take for granted, the bread toaster had some folks with great imaginations behind it. The electric toaster was pretty radical when it first came out, I imagine. Here is a brief history of some of the early models! 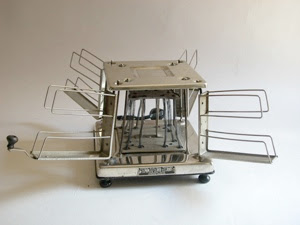 Prior to the development of the electric toaster, sliced bread was toasted by placing it in a metal frame and holding it over a fire or by holding it near to a fire using a long handled fork. Crompton and Company, Leeds, England invented toasters for bread using electricity in 1893. The technology that makes electric toasters possible, a nichrome wire that can endure high heat, has existed for a long time. At least two other brands of toasters had been introduced commercially around the time GE submitted the first patent application for their model D-12 in 1909. In 1913 Lloyd Groff Copeman and his wife Hazel Berger Copeman applied for various toaster patents and in that same year the Copeman Electric Stove Company introduced the toaster with automatic bread turner. The company also produced the “toaster that turns toast.” Before this, electric toasters cooked bread on one side and then it was flipped by hand to toast the other side. Copeman’s toaster turned the bread around without having to touch it. Copeman also invented the first electric stove and the rubber (flexible) ice cube tray.

Can you imagine living in a time when sliced bread was fairly new and toasters were just coming to be everyday appliances? Makes breakfast a little more interesting, wouldn't you say?

Coffee out on the patio again today. Fresh toast and honey to start the day!
Posted by HermitJim at 12:00 AM

My first toaster, won at a travelling fair :-) was the kind I had to flip the bread myself. It was the best toaster I've ever had! the cord broke and became dangerous otherwise I would never have replaced it.

But the thirst thing we made toast on at home looked like a tennis racket, a net over a round frame. on the bottom there was some kind of white surface that stopped the flames to reach the toast when toasting over our gas stove. It was perfect but we stopped using it when we realised that the white stuff was asbestos :-) :-) :-)

Well I'm still alive and kicking so I guess it wasn't that dangerous after all :-)

My Dad used to make our toast on the big, old castniron stove. The round plates on it were also used to make pancakes! Fresh toast and honey is a great way to start the day!

I am old enough to remember my Grandma had a toaster where you layed a piece of bread on both sides. They leaned in at an angle so they wouldn't fall off, but you had to flip it manually.

When I was young we didn't have one...Mom made several pieces at a time on the broiler on our "cook"stove. Of courseonly one side at a time...I'll bring some cinnamon to share..and thanks for the invite!

I 'member when I was a kid on the farm, we weren't allowed to eat toast for breakfast. Had to eat them dad gum ol' buttermilk biscuits fresh out of the oven ever morn'n.

Liv'n in the city later on in life....electricity an' all that stuff, we had a toaster. And store bought bread. Had two little lid thingys on each side ya open up, put some bread in there, close the lids an' walla, ya got a half toasted piece of bread. Of course ya could always turn the slices over an' toast the other side.

Hey Christer...
Brings back a lot of memories, doesn't it?

So many different kinds of toasters were in use by the readers back then.

Hey Phyllis...
Funny how handy those old stoves were, isn't it?

I think that Sixbears still uses a wood burning stove.

Hey Dizzy...
Wonder how many burnt fingers were caused by the early toasters? Probably more than we know!

Hey Mamahen...
As a kid, we made some of our toast under the broiler. Still do, in fact!

Hey Billy Bob...
I think I could handle some buttermilk biscuits for breakfast. Especially with some honey!

I'm thinking that all of our advances were not necessarily for the better.

Thanks for dropping in, BB!

My toaster is forty-one years old. I use it several times a week. Never had a hick-up. Sunbeam, I think. Then again, it wasn't made in China.

That toaster Dizzy is talking about sounds like the one we use for camping. Still can buy those where they sell camping gear.

I remember the slanted toasters too, just can remember if you had to turn the toast around.
I'll have some coffee with everyone now that my laundry is done.

Hey Jo...
Glad the laundry is all done. Now you can play the rest of the day!