This could getr to be a habit...having a day set aside for stories about treasure.

The thing is, there is so many cases of treasure hidden and never found yet, where would anyone start to cover them all? However, in this case the treasure we are talking about was found. Guess we are too late on that one, huh. 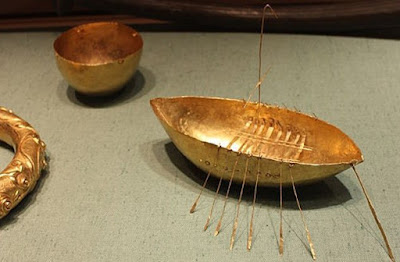 In February 1896, Thomas Nicholl and James Morrow unearthed the Broighter Hoard while plowing fields in Limavady, Northern Ireland. They took the treasure home and washed it—but had no idea they were holding gold from the first century BC. J.L. Gibson, who had hired Nicholl and Morrow, sold half the haul to a local antiquarian. Morrow’s sister sold another portion to a jeweler.

The most renowned piece in the hoard was a golden boat. The 7.5″ by 3″ boat contains two rows of nine oars, oarlocks, a paddle rudder, and benches. Initially, it did not receive much attention. However, archaeologists now believe it is the key to understanding the hoard. Some believe the gold was an offering to Manannan mac Lir—god of the sea. The presence of non-Irish loop-in-loop torcs—or necklaces—suggests that merchants with foreign interests likely made this offering to the “son of the sea.

Well, today might be a good day to invest in some gold or jewels for your loved one. After all, it is Valentines Day, right? Nice thing ( or bad thing) about living alone and being older is that I don't have to remember special days like Valentines any longer.

Coffee out on the patio this morning. The temps are a bit cooler than they have been, but that's OK.
Posted by HermitJim at 12:00 AM

the boat is quite beautiful, so very delicate that it is surprising that the ores lasted at all.

Happy Valentine's day to my Special Friend!
Yes it has cooled down again here too. Got up and turned the heater on during the night.

Hey Linda...
It's hard to believe that these pieces remained so delicate for that long. Good craftsmanship never goes out of style, I reckon.
Thanks for stopping by today!


Hey Jo...
We just went under a tornado warning in Houston and it does look stormy outside. Guess I better batten down the hatches. I agree that it's a wonder these pieces stayed together for so long.
Thanks, sweetie, for dropping by today!

Some of the oars must have been lost or stolen, since I can only count fourteen of them. I am sure, because of their size, that they could easily get misplaced. . . in someone's pocket (grin).

Hey Dizzy...
I'm sure that you are right about being "helped" to disappear because og their size. When it comes to gold, some folks just can't be trusted.
Thanks for the visit this morning!