Another Gunfight On Western Wednesday...!

As far as one sided gunfights go, this one might just be the champion!

I'd say that this ol' boy did just fine by holding of a rather lopsided attack and probably mad quite a name for himself doing it.

As far as one-sided shoot-outs go, there is probably none greater than the gunfight that took place on December 1, 1884 in Reserve, New Mexico. On one side, we had just one lawman by the name of Elfego Baca. On the other we had a group of angry cowboys numbering anywhere between 40 and 80 people. 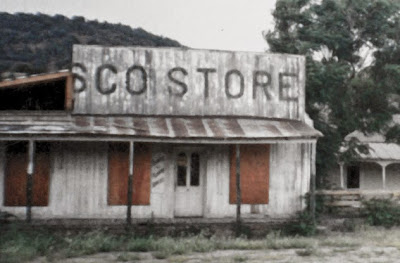 It all started when Baca arrested a drunk by the name of Charlie McCarty for shooting his guns randomly. However, McCarty had a lot of dangerous friends who soon came demanding his release. Baca managed to fend off this initial attack when the leader was killed by his own horse toppling onto him.

By this time, word started spreading that there was some kind of Mexican uprising, so an angry mob formed to deal with it. When the mob arrived in town, Baca was holed up inside a small house belonging to a local. When William Hearne, the leader of the mob, tried to break down the door, Baca killed him with two shots, officially starting a shoot-out that would last a staggering 36 hours.

Supposedly, up to 80 people took part in the gunfight and shot up to 4,000 rounds into the house. None of them hit Baca. The reason: The house had a dirt floor, and he’d dug a hole into it, lending himself cover. Eventually, the posse ran out of bullets. When proper authorities arrived, they surrendered, leaving Baca victorious.

Sounds to me like the Lawman had a few Angels on his side this particular day. He also must have had some nerves of steel, I reckon!

Smart feller! How many others would think to dig a hole? Good story. In honor of Mr. Baca, I'll bring an angel food cake!

That was one smart dude. I bet he was a nervous wreck by the end. Angels definitely played a huge part in this scenario. Good story for today.

Hey Linda M...
I'd say his nerves might have been on edge a bit.

Thanks for dropping by this morning!

Good story, maybe I should start reading about NM now since I covered most of AZ.

Pass the pot please it is chilly.
As if it isn't bad enough that they are adding these dumb robot numbers but this one is so low I don't know if I will get it right

Sometimes a true story of the old west is better than fiction. I prefer true stories.