While ghost stories are nothing new here, one coming from a church building might be a tad different.

This story is more about a disappearance than a ghost, to tell the truth. However, it is a mystery all the same! Besides, we all like the unexplained mysteries the most, right? 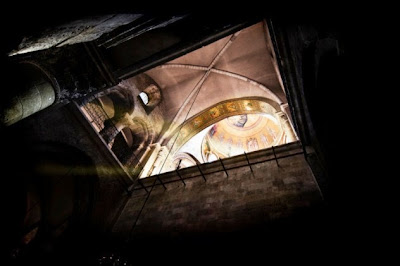 St. Mark’s Episcopal Church, built in 1868, is considered a historical landmark in Cheyenne, Wyoming. It’s also rumored to be haunted, and its alleged resident ghost has a bizarre origin story.

In 1886, plans were made to construct a new tower for the church. Two Swedish stonemasons were hired for the job, but they both mysteriously disappeared before the tower was finished. Because of this setback, the tower went unfinished until 1927.

The problem was the unexplained eerie happenings that started to occur inside the church, along with sightings of a mysterious ghostly figure. Whenever construction was planned on the tower, workers often became too frightened to finish the job. The workmen were even granted permission to build a private isolated room to accommodate their ghostly friend.

Decades later, Reverend Eugene Todd was serving as pastor at St. Mark’s when he received a surprise explanation for these supernatural occurrences. He had been summoned to a nursing home in Denver, where an elderly dying patient had requested confession with him. The man claimed he was one of the two Swedish stonemasons who had mysteriously vanished while working on the church many years ago.

Apparently, the other stonemason had accidentally fallen to his death in the unfinished bell tower. His partner was terrified that he would be blamed for the death, so he decided to entomb the body under cement inside an unfinished wall section before fleeing the area. Although the missing stonemason’s body has never been found, many people found the old man’s story credible and believe that the stonemason’s ghost haunts the church.

I don't think this is the "spirit" folks are expecting when they attend services. It might actually put a few folks off, know what I mean?

Coffee in the kitchen this morning. Anyone have a cookie to share?
Posted by HermitJim at 12:00 AM

Labels: Ghost story in a church

Hmmmm while ir wouldn't stop me feom going it would make me a little uneasy I think...I just happen to have a fresh batch of M&M cookiws another holiday fav at my house...i'll bring plenty :))

I don't think I'd want to go into that church - maybe just look at it from the outside!
Your cookies are the best Mamahen! It's cold here at 15. Brrrrr

I would love to look at the church but attending services with that "spirit" is not to my liking. Love M&M cookies - thanks Mamahen. Freezing wintery mix here. :(

Churches have many unexplained mysteries the ones here have many as the Indians would attack and kill most all whites building these churches on their lands. Old churches have very mystic feelings.

Pass the pot please its a little chilly but nothing like the ladies above are feeling. I see you added a robot thing sure is hard on the eyes to see

I wonder if people leave feeling full of the spirit? Old churches do have a mystical quality about them. I love the architecture.

If it were not for unexplained things, life would be a lot more boring.