One more notable woman from the wild west was a lady called Lottie Deno. Another tough ol' gal from I could gather.

Not as well known as Belle Star or Annie Oakley, or any other of the famous names we might be familiar with, this woman deserves some mention, in my opinion. 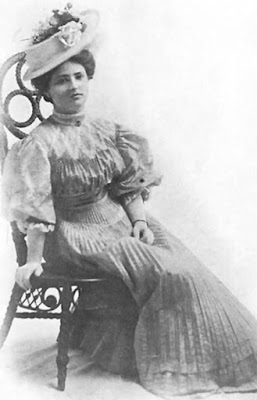 Lottie Deno went by the names Carlotta J. Thompkins, Charlotte Tompkins, Charlotte Thurmond, Mystic Maud, "the Angel of San Antonio," and "Queen of the Pasteboards" at different times in her life. She came by her gambling skills honestly, learning them from her plantation-owner father. After he was killed in the Civil War, young Lottie went to Detroit, where she fell in with Johnny Golden. Golden convinced her to become an itinerant gambler, which led her to San Antonio, Texas, in 1865. That's where Lottie fell for Frank Thurmond, whose family owned the gambling parlor in which she worked.

When Frank went on the lam over another man's death, Lottie followed, leaving Johnny behind. But Johnny followed Lottie as well, and was killed only a day after finding her in Fort Griffin, Texas. Lottie made a reputation for herself as a gambler all over Texas, even playing against professional gambler Doc Holliday. One night, when she was accused of cheating, someone said she should call herself "Lotta Dinero," after which she was known as Lottie Deno. Lottie and Thurmond traveled the Texas circuit, but eventually opened their own gambling room in Kingston, New Mexico, and later a restaurant in Silver City, New Mexico. She and Thurmond were finally married in 1880 and settled in Deming, New Mexico, where Thurmond later became vice president of the town's bank. Lottie gave up gambling and became an upstanding citizen and a founding member of the local Episcopal Church for the next 50 years. Lottie Deno is said to have been the inspiration for the character of Miss Kitty on the TV show Gunsmoke.

I don't think that many women were well known as gamblers back in those days. I could be wrong, though.

Coffee out on the patio where the temps are supposed to be Spring like.
Posted by HermitJim at 12:00 AM

My wife and I have been watching a lot of old Gunsmoke reruns lately. Now we know the REST of the story! - lol

Hey Gorges...
That last little bit of information was pretty cool, wasn't it?
Thanks for stopping by today!

Good post! I love the Missy Kitty reference being a fan of Gunsmoke. We had a nice dry day yesterday, but rain in the forecast for today and tomorrow again.

Since I am a fan of Gunsmoke I am happy to know where the character of Miss Kitty came from. It was a beautiful warm ( 50 degree) day here yesterday.

Hey Mamahen...
Glad you are getting some dry weather finally. Here's hoping you get plenty more soon.
Thanks for coming over this morning!


Hey Linda...
Finding out these little nuggets of history are always fun.
Thanks for the visit today!

Great story, I think there are more lady gamblers from that time than we may know about but only the best are remembered.

That cold front moved in over night and dumped some rain. Sun is trying to peek through the heavy clouds but it will be a cold day.

That was a good story!

Your posts on history always fill in the blanks that seem to missing from recorded history. Good job Mr. Hermit.

Hey Jo...
You are probably right about that. Guess she was one of the best then.
Thanks for dropping by, sweetie.


Hey Rob...
Gad you enjoyed it, sir.
Thanks for stopping in today!


Hey Dizzy...
I just do what I can ya know?
Thanks for the visit today...Diz!