This isn't a trick question at all, but the answer may come as a surprise.

Much of the white sand beaches round places like Hawaii are made from Parrot fish poop. Here is how that happens...

Absurd Creature of the Week: This Goofy Fish Poops Out White-Sand Beaches 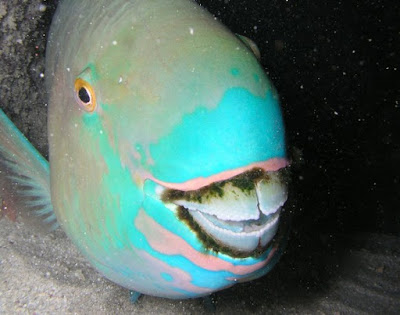 AH, HAWAII. THE resplendent luaus and awe-inspiring volcanoes. Tom Selleck and his mustache running around private-investigating stuff. The beautiful white-sand beaches made of fish poop.

Oh, that’s right. Your precious Hawaiian beach vacation was actually a frolic through epic amounts of doody. Specifically, the doody from a very special kind of critter: the parrotfish. You see, parrotfish are quite partial to the algae that grow on coral, and they gnaw it off with two impressive rows of fused, beak-like teeth (hence their name). Simply by chewing on reefs, a large Hawaiian parrotfish can ingest a coral’s calcium carbonate and poop out up to 800 pounds of sand each year, according to marine biologist Ling Ong of Hawaii’s SWCA Environmental Consultants. One Australian species, she notes, produces up to one ton per year.

And the parrotfish isn’t alone here. “In places like Hawaii, where we have very little terrestrial input of sand, almost all of our sand is of biological origin,” Ong said. “So I like to tell people that the sand you’re standing on in Hawaii has probably gone through the gut of something. It’ll have gone through the gut of a parrotfish, a sea urchin, some kind of worm.”

You can read the entire article right here.

Coffee in the kitchen this morning. Raining again.
Posted by HermitJim at 12:00 AM

I think that's hilarious. Hope to go to Hawaii next year. I'll let everyone know about the sand.

I'll stand on some of that poop in May. Let you know if I even remember it then,probably be too busy enjoying the view to even consider fish doody!

Long time reader, first comment I think. Love this story, now if we could only find a good use for ours :)))

Well gee that's some interesting news, I doubt I will ever stand on it, not that I wouldn't love to.

More rain for TX. they keep telling us we will get some this coming week. But she always talks about this big storm with lots of rain, the it rains for 4 mins.

Hey Momlady...
You can serve as our onsight reporter. Always good to have a reliable firsthand report.
Thanks for stopping by this morning!


Hey Sis...
Should be a nice trip, and I'll be sure to remind you about the ol' parrotfish thing. Hopalong Cassidy...cool!
Thanks for coming over this morning!


Hey Bob...
Now that would be a subject worthy of a good discussion over our coffee. Certainly enough raw materials around now days, especially in the D.C. area.
Thanks for the visit this morning!


Hey Jo...
We have had some really strange weather this year Several snows, more rain than usual, the list goes on and on. I'm ready for a good dose of Spring!
Thanks, sweetie, for dropping by today!