From Listverse I picked up this article that could be disturbing, to say the least.

I don't know if this weapon is real or not, but at this point, I wouldn't be surprised were it real. Part of me wants it to be phony, and part of me leans toward wanting it to be true. The only reason I would want it to be real is the non-nuclear aspect of the whole thing. 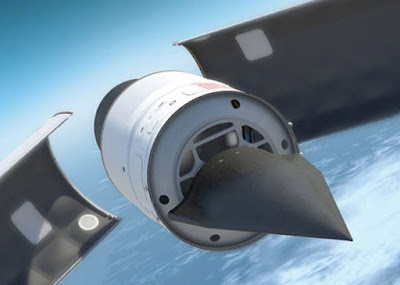 Potentially overshadowing the MOAB as the most lethal nonnuclear weapon in the United States’ arsenal, Project Thor is a technology designed by Jerry Pournelle in the 1950s that would obliterate enemies with bolts from above.

Colloquially termed “rods from God,” this type of Kinetic Energy Penetrator (KEP) would theoretically consist of a pair of satellites. One serves as a targeting hub, and the other is equipped with 6-meter-long (20 ft) tungsten rods that would be dropped on a target from orbit. Capable of penetrating hundreds of feet into the Earth’s crust, these thunderbolts from Thor would produce damage equivalent to a nuclear blast without the fallout.

Though the cost of delivering such rods into orbit is seen as prohibitive, reopening the Project Thor initiative was seriously considered as recently as the George W. Bush administration. With $21 trillion supposedly appropriated without authorization by the Department of Defense and a few other agencies, it’s hard to know what potentially cost-prohibitive theoretical projects the United States government might be silently making into reality without the knowledge or consent of its people.

This is one of those things I really don't want to spend a lot of time thinking about, as it would more than likely make me crazier than I already am.

Coffee out on the patio again today. Weather has been really nice the last couple of days.
Posted by HermitJim at 12:00 AM

If someone is going to actually be dropping bombs from space I'd rather they were not nukes.

Coffee outside is a fine idea!

Hey Rob...
I am definitely with ya on that!
Thanks for stopping by this morning!

I don't want any kind of bomb dropped on my head. However, given a choice I'll take the non-nuclear one. Coffee on your patio sounds great. We are in a deep, deep freeze here. Have a great weekend.

Scary any way you look at it. Send some of that warm weather this way, please.

I'm with the non nuclear myself.

Had to turn on the A/C for a while yesterday afternoon this is not to my liking at all. See you on the patio

non nuclear is definitely better for everyone. but the Bible is clear that nuclear devastation is what we have to look forward to.

Hey Linda...
I agree that the non-nuclear is the way to go for most of us.
Thanks for coming by today!


Hey Momlady...
It is scary, for sure. Stuff of nightmares.
Thanks for the visit today!


Hey Deborah...
I don't even want to think about it!
Thanks for the visit today!

Nuclear bombardment would make the impact area and many miles away, desolate and unfit for human life. That would not benefit anyone, neither the enemy nor the targeted.

Hey Dizzy...
I vote for the non-radiation version myself. I really don't want to glow in the dark.
Thanks for the visit today!

You have to spin these things so that they dont tumble on the way down, and since they are effectively a man made meteor, arriving at about 17,500 mph, accuracy is not a strong point, target area being about a mile or so in diameter. more a "hey, look what we can do" rather than " lets take out that base without disturbing the school kids next door". No, you would not be able to steer them, 20 feet long by maybe 8 inches in diameter, Polar Moment of Inertia slightly colossal. Fun idea in principle, would work for a certain value of "work", but probably does better in science fiction than the real world. They are probably spending the R&D budget on hyper velocity gliders and aircraft, which is what that picture shows.