So often when we think of the Old West, we forget about the many roles the women played, but there is no doubt that the fairer sex played an important part in the shaping of the West as we know it. 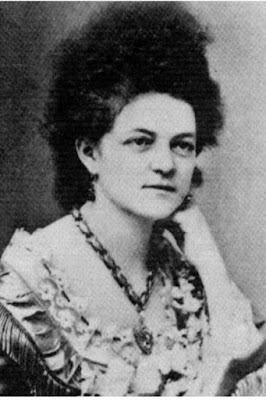 Perhaps born in New Orleans to Creole parents around 1829, Dumont’s early life is not well-known. What is known is that she appeared in Nevada City, opened up a gambling house and immediately enticed men with her good looks and even better manners. Dumont fell in love with conman Jack McKnight who stole her money and sold her ranch. Dumont tracked McKnight down and shot him dead. After that, she returned to gambling. She became plump and a thick line of hair began to grow on her upper lip, earning her the nickname Madame Mustache. After that, Dumont’s fortunes continued to dwindle. In 1878 she lost $300 of borrowed money in one night of gambling. She was found dead the next morning.

It seems as though even the women of the West could fall on hard times. Some ladies just weren't cut out for that particular lifestyle, I reckon.

Coffee out on the patio, where they say the temps are going to be in the 70s...and that's fine by me!
Posted by HermitJim at 12:00 AM

I know I for one was not cut out for that hard life. I also think many women were taken advantage of in that time period. We couldn't all be like Miss Kitty from Gunsmoke. Happy Valentine's Day Mr. Hermit.

Just as glad I didn't live back then. Too used to all the modern comforts. TV romanticized it so people today have no idea what it was really like.

I have a book about frontier women, they were tough had to be. But some still got bowled over by these con guys.

It was a tough life for everyone in a lot of ways... Today we are living in the golden age.

Hey Linda...
Indeed it was a hard life and many women were taken advantage of. Still, their choice of companions had a lot to do with that, I think.
Thanks for stopping by today!


Hey Momlady...
Modern comforts are a good thing! I certainly would agree that doing without would not be pleasant.
Thanks for coming by today!


Hey Jo...
Tough or not, conmen could and did get the best of many. Some conmen did pay a heavy price when the women caught up to them.
Thanks sweetie, for dropping by this morning!


Hey Rob...
Guess when you don't know anything else, that lifestyle doesn't seem too bad. I wouldn't want it today, though.
Thanks for the visit this morning!