Of all the different things that are traditional about this time of the year, perhaps nothing says "Christmas" more than the candy cane!

While there are many versions of the origins of this humble candy, I think that we all agree that at one time or another we have had the sweet pleasure of munching on a candy cane! I can't even imagine NOT having candy canes around the house or hanging on the tree during the Christmas holidays!

Although the striped candy is traditional at Christmas, they are available year 'round. In my opinion...that is a good thing! 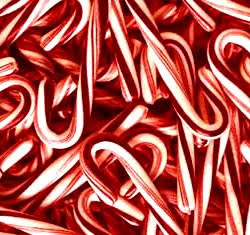 OK, history time again! Here is a little rundown on the origin of the candy canes. I hope you find it interesting...

Candy canes were probably first introduced over 350 years ago. Professional candy makers had learned that sugar could be stretched and rolled into various shapes. This prompted them to produce straight, white sugar sticks that were easy to eat. During the 1600s, people began to decorate their homes at Christmas time. This typically involved a tree and various sweets like cookies, cakes, and stick candy. The historical evidence indicates that candy canes were first given the cane shape in 1670 by a German choirmaster at the Cologne Cathedral. He supposedly gave the children who sang in his choir sugar sticks that were bent like a shepherd's staff to keep them quiet during long services. The tradition of handing out these candies during Christmas services spread throughout Europe.

The candy cane was first introduced to America in 1847 by a German-Swedish immigrant named August Imgard. He decorated a Christmas tree with candy canes in his Wooster, Ohio home. Evidently his creation had inspired others and a tradition was born.

While people had occasionally enhanced the appearance of the white candy cane with colored sugar prints, it was not until the early nineteenth century that candy canes got their stripes. It is not known exactly who gave candy canes this characteristic, but they have been produced that way ever since. This is also about the time when the flavors of peppermint and wintergreen were added to make the product known today.

During the early part of the century, candy canes were made by hand. This process was extremely laborious. Candy canes were sold almost exclusively at a local level. In the 1950s a Catholic priest named Gregory Keller invented a machine that could make candy canes automatically. This sparked the mass production of the candy. Today, over 1.7 billion candy canes are sold each year.

You know, this would make a good at-home history lesson for the kids! Imagine...having a class with edible homework! No more having to blame the dog...the kids will be more than happy to accept the blame for this one!

Now, my friends, let's get some coffee and sit at the kitchen table...while we figure out another way to gain a few pounds this holiday season!
Posted by HermitJim at 12:05 AM

Good Morning My Special One, can't believe I am the first one here this morning and with such a yummie subject. I like the new blue and white ones myself. Its fun to learn how they came to be, and the meaning behind the cane shape.
Thanks for another leasson,
Pass the pot please its chilly this morning.

Hey JoJo...
You are the first one, sweetie! Number one on my hit parade!

Glad that you like the post...and I think that all the candy canes are pretty good, as far as taste goes!

Pretty cold here as well today...in fact, they are hinting at maybe sme snow for Friday!

Thanks, dear, for coming by today!

I like hanging candy canes from the tree...but it's a battle to keep them there any length of time. The Evil Genius is right fond of 'em!

I must admit...I find the modern fruit flavoured ones disturbing. I don't care for the garish colours or chemical flavours.

Cold and rainy here, no snow in the offing. Sigh. A goood day to stay indoors and work on a blanket or quilt...but I've got band practice, so it's out into the weather we go. Have a good one!

Hey K...
I like the canes hanging on the tree as well! And, yes, I will also admit to taking one or two off from time to time to munch on!

I'm with you on the original colors and flavors...still the best!

Sorry you have to go out today...but we'll keep the home fires burning for ya!

You are just a fountain of knowledge. I am learning all kinds of Christmas facts I never knew before. We always put candy canes on our tree but never eat them. I guess that is kind of odd but I don't care for the peppermint. I just have to have them out there because it is a tradition.

Hey Rae...
What you could do is to save the canes, and pass them out during the next round of trick or treater's next Halloween!

They do have other flavors out now as well!

Thanks for coming by today, my friend!

And here I thought Candy Kane was an actress.....

Hey Catman...
You know, I think you're right! By golly, I think she dances t a club around here as well!

Hey, thanks for coming by, buddy!

Oh my, leave it to my husband to bring up that Candy Kane. LOL!

Thanks for the info on the candy cane, Uncle Hermit.

I have to have one candy cane every year around this time. It is the only time I eat a peppermint candy other than the occasional York peppermint patty.

But to me, the candy canes of today just don't taste the same as I remember from when I was little.
Doesn't stop me from eating them though LOL!

Have a great day!
Hugs~Felinae~

Hey Felinae...
I wonder if they really taste any different, or like many other thiongs...our memory plays tricks on us about the taste we remember?

Either way...I think the candy cane is a permanent part of my Christmas memories!

Thanks for droppig by today!

Crunch some up in some peppermint ice cream and I'm there. :) I used to hang them on the tree for decorations, but now with the kiddos they'd last about a day and a half then all my decorations would be mysteriously missing ;) You know how that goes.

Hey Angela...
I know what you mean about the ice cream, for sure! I like it all!

Eating the decorations must be the reason that gingerbread men, sugar cookies and candy canes aren't used much for decorating any more!

I made a popcorn string for the office Christmas tree years ago hen I worked for the telephone company...they used that same popcorn for about 3 years! Last a long time, but is a real pain to make!

Stir stick for a mixed drink? Gotta be something in the history of the candy cane about that? Dig deeper.lol

Hey, thanks for coming by today, buddy!

I use them for stirring my hot chocolate. Yummy.

Hey Bob...
I reckon that is a very good way of doing the stirring. Should add enough peppermint flavor to be enjoyable.

Hey, I sure do appreciate you coming by today!