Sometimes in life, the choices you make come back to cover you with crap! 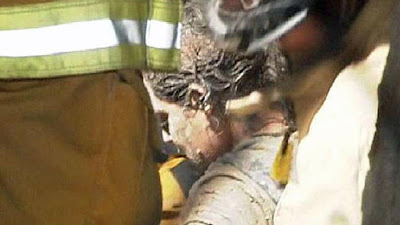 Sometimes the bad guys get a dose of justice!

5 Trapped in Border Tunnel Filled with Sewage
The secret border tunnel is believed to connect Mexico to Otay Mesa, a distance of 150 meters
By R. Stickney

Five people were trapped in a tunnel near the U.S.-Mexico border and had to be rescued early Wednesday.

The four men and one woman were discovered inside the tunnel partly filled with sewage in Otay Mesa. The tunnel is believed to lead to Mexico, which is about 150 meters away.

The five were trapped at a point in the tunnel where a fence made it impossible to get through to the U.S.

U.S. Border Patrol agents used a dog to find the opening in the 9800 block of Via De La Amistad behind a company called Artic Containers.

Agents believe a manhole on the Mexican side is the entrance.

San Diego and Chula Vista firefighters worked for about 45 minutes to dig out the trapped victims, bringing them out one by one.

They then hosed down each person because of their exposure to sewage. The men were stripped to their underwear. The woman was taken behind a tarp where she was hosed off.

All the victims were healthy without any physical injuries, according to Border Patrol.

A robot was sent into the hole to investigate, but it got stuck according to officials.

Border tunnels are not new to the Tijuana-San Diego region. In November 2010, a tunnel running 600 yards under the border was discovered along with nearly 30 tons of pot.

Soon after, a second tunnel was discovered equipped with lighting, ventilation, and a rail system for drugs to be carried on a small cart.

U.S. authorities have discovered more than 125 clandestine tunnels along the Mexican border since the early 1990s, though many were crude and incomplete.

I think that for these folks, this turned out to be a crappy situation! At least they got washed off when they were rescued. The normal treatment for them on the other side is just to get "hosed!"

It's chilly here, but coffee on the patio will perk us right up...don't you think?
Posted by HermitJim at 12:05 AM

I am a little confused. If there was fence blocking passage through the tunnel, how did US agents get through from the US side? At least they got rescued and hosed off.

What a stinky job for the Border Agents.
They should do what they do up here with people in tunnels, Wash Them Away!!

Just hook a big old honking pumper truck to the tunnel on our side and flush them back out!!

Why don't we just make Mexico our next state?

Hey Dizzy...
It does read a little confusing, doesn't it?

The only thing I can figure is that the fence was just before the tunnel exit on the U.S. side.

I'm just glad no one was found dead!


Hey Ben...
Maybe with the drought and all, there was a shortage of water?

They probably have all this figured out and have done it so many times, to them it's an art form!

Bet it sure made a mess somewhere!


Hey Momlady...
You mean it's not? Sometimes I think that's probably a good idea!

I appreciate you coming over this morning!

I like Ben's comment that was what I was thinking too. why be nice to them maybe if more are not rescued some of the others might just get it to stay away. I guess we couldn't get that lucky.

Hey JoJo...
I guess that maybe that's what separates us from the other side...how we treat people sneaking through the tunnels!

I do feel that we don't have stiff enough punishment for those that get caught! We deport them, and they're back before the ink is dry!

Beats me what the solution is.

Hi, This is barre army navy, we need need your name, fist and last to act as a valid entry into the paracord contest.

If I was in Mexico, I'd wade though sewage to get to the US. Just glad my ancestors got here before they raised the requirements.