I Thought That Cheese Tasted Funny...!


Smugglers will try nearly anything to get their crap into the states.

I have to give them credit for this one, though. I have never heard of this tactic, but I certainly hope none of this ever reaches my grocery store! 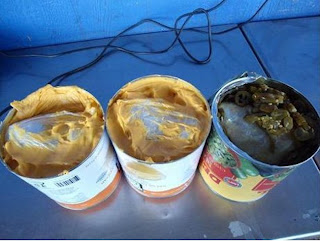 Customs and Border officials nabbed a 21-year-old Mexican citizen this week on suspicion of smuggling $140,000 worth of methamphetamine in these three cans of liquid nacho cheese and jalapenos, the LA Times reports. Incredibly, this is not the first time nacho cheese has been used as a smuggling tool. In October, a customs officials found 7 pounds of meth hidden in nacho cheese cans, NPR reports.

Next thing you know, these evil jerks will use my peanut butter to smuggle stuff in! That would be the ultimate insult! I say this has gone far enough! Time to put an end to all this bull!

If they touch my coffee...then we have a REAL problem!

Coffee in the kitchen again, folks! Gonna be that way for a few days!
Posted by HermitJim at 12:05 AM

I must admit I had never heard of that tactic either.

It is incredible what lenghts drug dealers will go through to get their merchandise across the border.

Hey MsBelinda...
When they start messing with our coffee and peanut butter...and FOOD, things have gone too far!

Now I see where they are going to allow an unmanned border crossing into California!

Wonder what the feds are thinking?

Sorry about that, but I said the crossing would be into California...when it's really going to be right here in Big Bend Park in West Texas!

Now that pisses me off!

On this new border crossing, unmanned? OH HELL NO. Its time these (fill in the blanks) wake up and put our combat troops on the border with shoot to kill orders. Unmanned my assets.

As the prices go up, they'll skip the drugs and smuggle in food.

The kettle in on the woodstove. The lake's freezing over.

We need the rain chief, I don't mind drinking coffee inside, listening to the rain music on the rooftop. 8^). Even the cool isn't too bad, just wish the mud would be washed away clean. We had quite a few power failures due to dust getting caught in insulator power lines, some pole fires were common.

Smugglers are getting creative, no doubt. Anyway whichway however it can be done, it will be dreamed up and attempted.

Wonder how many of the same thing made it into our country before the Feds caught this one?

They better not mess with or peanutbutter or coffee I will start a war of my own!

Looks like rain here to but the temps aren't bad, wind is up.
Don't you love the way we pass our weather reports around. :) I think we do a better job.
I'll stay for a cup and then must run. Party at my place tonight.

Hey Rob...
It seems to me that the PTB just can't get it right when it comes to protection at the borders!

Maybe we are making it too hard to get drugs across the border! Who knows?


Hey Sixbears...
Food smuggling might be very profitable before long! Gotta be well off to go to the grocery store anymore!

Lake freezing over already? Break out the ice skates!

Keep that kettle going! Thanks for coming by today!

I sure can take me some good naps when it's raining...know what I mean?

The guys are certainly creative if nothing else!


Hey Ben...
There just isn't any telling how many got in! A bunch, I reckon!

Thanks, buddy, for coming by for a visit today!


Hey JoJo...
Yep! They better leave my peanut butter and my coffee alone!

Besides, I think the coffee franchise has been given to the Columbians!

As long as it's wet and semi-warm(not freezing), I don't mind!

Thanks, sweetie, for the weather update and for coming by today!

I don't need them to hide their drugs in my coffee; I am already adicted to coffee - especially Columbian.