Sometimes we should take a little time to remember some of the truly humorous folks from our past!

Not only was Will Rogers funny, but he was a very talented man. If you read some of his quotes, you'll find that he considered the government fair game for his many barbs and snide comments! A man after our own hearts, that's for sure! 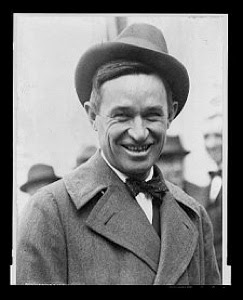 Born William Peen Adair Rogers, a Cherokee-Cowboy, “Will” became best known as an actor, a Vaudvillian, a philanthropist, a social commentator, a comedian, and a presidential candidate. Known as Okalahoma’s favorite son, Rogers was born to a well respected Native American Territory family and learned to ride horses and use a lasso/lariat so well that he was listed in the Guiness Book of World Records for throwing three ropes at once—one around the neck of a horse, another around the rider, and a third around all four legs of the horse. He ultimately traveled around the world several times, made 71 films (50 silent and 21 “talkies”), wrote more than 4,000 nationally-syndicated newspaper columns, and became a world-famous figure. He died in a plane crash in 1935.

I'm just guessing here, but I suspect that if he were alive, ol' Will would have a ball with everything going on today in the world of politics! What do ya think?

Let's have our coffee inside this morning. I have some Chocolate Fudge Pie that I'll share!
Posted by HermitJim at 12:00 AM

I have a few Will Rogers quotes in my head and think they are timeless.

Here is a very good one.

"If Stupidity got us into this mess, then why can't it get us out? "

I bet he would tear the current government to pieces.

In this totally pc world, few would ever hear of him I bet! That's too bad because we NEED people like him again.
OMG - chocolate fudge pie??? Will be there in a second!

We sure do need a person like Will Rogers about now. coffee inside with chocolate fudge pie sounds good. It is minus 7 degrees here.

I do remember his name and I may have seen some old rerun as a child but that was way before my time. I should look him up.

I have never heard of a chocolate fudge pie so I guess I better have some sounds to good to pass up.

He was one of most favorite people from the past. Had a very quick mind and could come up with some great and true comments, for sure.

I would really, really LOVE to hear what he would have to say about our government today. haha! It would be great.

Hey JMD...
I think most of his quotes could be well suited to the world today! They are most definitely memorable!


Hey Momlady...
I'm thinking you are certainly right about that!


Hey Phyllis...
Guess that we "more seasoned" in the bunch at least had a chance to hear some of his stuff...and know who he was!

Somethings never go out of style!


Hey Linda...
Seems like it's getting colder there! You better keep those feet warm!

Plenty of room inside for pie and coffee!


Hey Jo...
If you haven't had some chocolate fudge pie you are in for a treat!

Do a little research on Will Rogers and I think you'll like him! Funny man!


Hey Dizzy...
He could throw out some zingers, that's for sure!

Thanks, buddy, for coming over this morning!

Many thanks for taking the time to visit!

Seems I read that he was a descendant of Sam Houston's Cherokee wife, but I don't think Houston was his g?father.

If he were around today he would make our present government leaders run for cover!

Jim,you are so right he was funny yet there was always logic. We could use a Will Rogers today! Good one Bro!

I rode through his old stompin' grounds last summer. Oklahomans love Will Rogers!

He was funny, but funny doesn't fix things.

Hey Lady Hawthorne...
Just another one of history's many mysteries!

Tanks for the visit today!


Hey Bob...
He might have got their attention, at least!


Hey China...
Sure wouldn't hurt to have another like him! We need it!

Thanks for dropping by, my friend!


Hey Craig...
Bet that was an interesting trip. Love all the history you can find out on the road!

Thanks, buddy, for the visit today!