Sometimes we can find some great old mysteries almost right on our own doorstep!

I guess the most worrisome thing about some of these older crimes is the fact that many of them have never been solved. Guess that Texas hasn't changed all that much over the years...we still get our share of blood thirsty killers from time to time. I don't think many are like this one though! 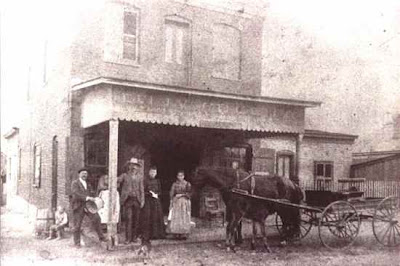 The Servant Girl Annihilator, or Austin Axe Murderer, was a serial killer or killers who terrorized Austin, Texas, between 1884 and 1885. It is thought that at least seven women, mostly servant girls, died at the hands of the killer, who typically dragged his victims from their beds and raped them before slashing or axing them to death. Several victims were stabbed by some sort of spike in the ears or the face. His first victim was Mollie Smith, on New Year’s Eve, 1884. Many people were arrested for the crimes, but none were convicted. The last killings were a year after the first, ending with the murder of two wealthy white women, Eula Phillips and Sue Hancock, in central Austin, on December 24, 1885. The crimes represented an early example of a serial killer in the United States, three years before the Jack the Ripper murders in London. Some have even attempted to prove that the Annihilator and Jack the Ripper were one and the same. You can read more about this killing spree here.

You have to wonder what it is in some folks' mind that makes them do things like this. Guess the crazies were abundant even that far back, even in Texas! Sad, isn't it?

How about coffee in the kitchen again this morning? It's drizzling outside!
Posted by HermitJim at 12:00 AM

Wow, I never heard of this one either. I hope some way or another, the perpetrator of these crimes found justice.

Good mystery! Back then they didn't have all the crime fighting tools we have now. Eventually in modern times, most of them are caught.
It's 27 here, not bad out with no wind, so it is quite enjoyable!
How about I bring some ginger snaps and apple butter?

It's a reminder that there have always been some really evil people out there.

Evil has been around since time began. It just seems more prevalent now but that could be because of the internet and the media. I hope some day doctors can find out what causes people to commit such heinous crimes so that we can prevent this from happening in the future. Those killings must have really frightened people back then. Coffee inside is good 12 degrees here but the sun is supposed to come out and warm us up to about 35 today. Have a great day.

There's nothing new under the sun as King Solomon said. It just seems like there more frequent today. I don't buy the "Jack the ripper" connection. Trans atlantic travel in those days would have been very costly for the average person. I believe they have said the jack the ripper killer may have had medical experience, very precise. Frosty morn here.

Never heard about these killing before. How nasty I hope they were already dead before he started this attack.

You sure have been getting some good rains there. I know it gets old but we always need to think of the water we need.

Evil has been around since Eve ate the Apple (grin).