Now this is not what you would expect to see when I mention a park. You might say that this one is really unique and has an interesting story.

This particular park has the distinction of being the world's smallest park. The story of how this all came to be is very interesting, to say the least! 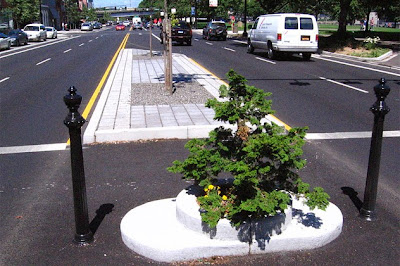 We’ve mentioned Mill Ends Park before, but this record holder for the world’s smallest park has seen drama since then, and it’s all focused around its (rather small) mystical tree.

The park in Portland, Oregon, was created on a small piece of dirt in the middle of a road that was originally intended to be home to a set of traffic lights. When the installation of the lights failed to go ahead, a local newspaper columnist named Dick Fagan began planting flowers there. It was there that he met Patrick O’Toole, a leprechaun. Fagan captured the little fellow, and according to tradition, a captured leprechaun must offer a wish.

Fagan wished for his own park, and the leprechaun granted him the small section of dirt in the road. Since that spot also happened to house a leprechaun colony, Fagan planted a small tree there to offer them shade. Later additions were made, including a miniature Ferris wheel delivered by a full-size crane.

At the beginning of March 2013, the tree was stolen from the park. The people of Portland, having pledged to take care of the city’s leprechauns, sprung into action—the tree was replaced. A spokesman from Portland Parks & Recreation department said, “We had to do what we could to ensure the leprechauns had shade.”

A week later, the original tree was returned and left lying beside its newly planted replacement. Yet despite the fact that the criminals had seen the error of their ways, the police weren’t willing to let the matter drop. “We will continue to pursue our investigation and hope that justice is served, and served swiftly,” said sergeant Pete Simpson.

Ya know, in this day and age where the news is all about murder, mayhem, and the madness of the World in general, it's nice to be able to focus on something a little more calm. Something about peace and serenity and beauty...no matter how small it may be! Just maybe that means there is some tiny bit of hope for all of Mankind!

Coffee out on the patio this morning. Warm temps and sunshine headed this way!
Posted by HermitJim at 12:00 AM

That is the kind of news I like and I like how they quickly planted a new tree there :-) Of course the leprechauns must have shade.

Over here we plant trees in our gardens (we call those trees for Care trees)for relatives to the leprechauns we call them vättar (Wight in english) but I've never heard that they give us anything especially if we should catch one.

Most of our beings over here have a short temper and would probably punish us if we caught them :-) :-)

Hmmmm. Well i'm glad they planted another tree! I'm all for trees where ever it may be.....Best to keep th wee ones happy it seems :))

Nice little story, Mr. Hermit - we need to see more of them in the news!

I don't have them in my woods. Instead I have faeries. I feed them apples from time to time. But I'm glad the folks in Oregon are taking care of their wee ones.

What a nice little story and park. Maybe the wee ones gave the thief something to think about and they decided they really didn't want to keep the tree. some fools will steal anything.

I made some Dunkin Donut coffee this morning I'll bring along.

That is one of the most serene parks I have ever seen. Thanks for sharing this bright spot.

I wonder if the groundskeeper knows bonsai?

Hey Christer...
I think that the vattar around your place would be very happy, judging from the pictures that I've seen from around your cottage!

Hey Mamahen...
I think that the story and the thought behind it is nice. Beats everything else in the news right now!

Hey Phyllis...
It is sort of nice to hear of something else besides all the doom and gloom, isn't it?

Hey Momlady...
At least you are taking care of the creatures of your woods! Apples are probably a good idea!

Thanks for stopping over today!

Hey Jo...
I'm glad you liked the story this morning!

Right you are about some people stealing anything!

Thanks, sweetie, for stopping by today!

Thank you for coming over today!

Pretty little tree, for sure!