This is the kind of place where many urban legends could grow. Probably have, come to think about it!

More than likely, somewhere in every state there is something akin to this. At least it seems to me that's the case! I'll bet that the older folks in the family could tell some strange tales about landmarks like this one. 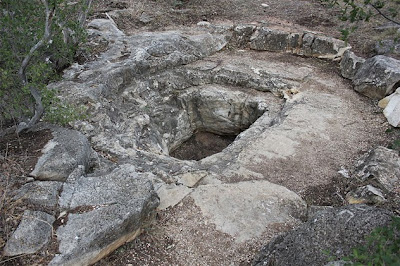 Dead Man’s Hole was discovered in Texas in 1821. Its other name is Devil’s Well—so it’s obvious that it hasn’t had a pleasant history. The sinkhole earned its reputation during the American Civil War, when Confederate gangs used the hole as a dumping ground for those with Unionist sympathies. The bones of at least 17 people have been found piled at the bottom of the sinkhole.

One particularly creepy feature of the hole is an oak tree growing beside it, with a strong limb stretched directly over the hole. Those destined to die would be hanged from the oak. Then, the rope would be cut and they would plummet to the bottom of the 47-meter (155 ft) drop. On the off chance that anyone survived both of those things, the hole was full of poisonous gas that would finish the job. It’s because of the gas that the sinkhole wasn’t fully explored until 1951, when breathing equipment became more readily available.

Today, the hole is covered, and a plaque commemorates the men known to have ended up there. Among those men were a pro-Union judge and several Union officials. Another victim was a man named Ben McKeever, who killed a former slave when his horse was bitten by the man’s dog. McKeever was ambushed by his victim’s friends and thrown down the hole. Unsurprisingly, its gory past has led to stories of people seeing and hearing ghosts in the area.

Ya know, maybe we should organize a road trip to all get together and search out some of these places! Might make for an interesting way to spend some time in the summer! Just think of all the stories we would have to tell around the campfire!

Coffee out on the patio again. Want some cinnamon sugar toast?
Posted by HermitJim at 12:00 AM

You always manage to come up with something interesting.

You know me always ready for a road trip. Good place to send the Ghost Hunters don't you think?

Having coffee out on the patio sounds great the weather sure has been great for it.

Interesting as always....count me in for the toast n the trip sounds like fun :))

Hey Phyllis...
Does seem like a good time to plan a road trip, even if we can't go! After all, it is SPRING!

Hey Linda M...
Exactly what I was thinking!

I appreciate the visit this morning!

Hey Mamahen...
Now we are getting a good group to go! The planning sure sounds like fun!

Dang, I have been real close to that place but didn't know it was there or I would have stopped. Maybe next time. Thanks for the new information.