I can't remember even one person that I know that hasn't seen or tried the now famous "ChapStick!"

Believe it or not, there is an interesting history behind this well known product. Naturally, I figured you might find this little bit of trivia worthy of a read! 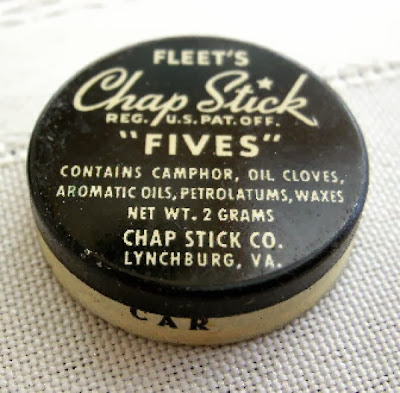 Virginia physician Charles Fleet invented lip balm in the mid-1800s, selling the first version of his product as little waxy-looking tubes wrapped in tinfoil. The product was successful, but decades of wrapping little waxy tubes in tinfoil must do something to a man, for by the early 1900s Dr. Fleet was keen to sell off his idea.

The endeavor had begun to lose money, so in 1912 Fleet sold his recipe to John Morton for the whopping sum of five bucks. Morton began mixing up batches of the stuff in his bathtub, while his wife would melt it down, cool it, and chop it into pieces in their kitchen. Apparently their heart was in the lip balm business to a greater degree than Dr. Fleet, as they were able to use their profits to fund the startup of Morton Manufacturing and begin pumping out ChapStick in earnest.

In the 1930s, the company commissioned artist Frank Wright Jr. to produce the iconic ChapStick logo, which of course is still used today. Wright’s fee? Fifteen bucks, which you’ll notice is three times the amount paid for the recipe. If there has ever been a more shrewd twenty dollars spent, we’d love to hear about it.

I think that this shows that even the most mundane product can have an interesting history, if you are willing to look for it. Thanks to the folks over at Listverse, I can always find something interesting to pass on! History can be found in the strangest places, don't you think?

Coffee out on the patio this morning. It's gonna be chilly, so wear a sweater, OK?
Posted by HermitJim at 12:00 AM

Couldn't live without my ChapStick!
Oh, to be able to wear just sweater! It's 8 degrees here! I'll bring some warm corn muffins for all.

Oh, I'd bet I have a tube of it within reach in just about every drawer in the house. Couldn't live without the stuff.
We too are a couple months off from sweater weather. Gah!

I don't know what I would do without my ChapStick, especially living in such a cold climate. We are at 10 degrees, so if you don't mind I'll bring a jacket along.

Cooked up in a bathtub? I don't care - still love the stuff. It's a staple at my house like Vicks Vaporub. And 3 year old grandson can always find that he needs some!
Thanks for the background. Weather looking good today - I can already see sunshine.
Big Hugs ~

ChapStick has always just been there.. maybe that's because the design of the label cost tree times as much as the formula?

At least the sun is shining this morning!

Living here in the desert you need all the chap stick you can buy. Yes I have them in every room. The only other one that works as well is Burt's Bees but it is way to expensive when you need it all the time.

Just curious, why is the word "CAR" stamped on the can? Is it an abbreviation for something.

Hey Phyllis...
Most folks have more than one tube handy! In this weather it seems to be almost a necessity.

Hey Bob...
One of those things that makes the Winter almost bearable.

Hey Linda M...
Bring the jacket if you want, I don't mind.

The stuff sure does come in handy!

Hey Sis...
Gotta have it handy for the small one. Boy, I can remember all the times we got rubbed down with the Vicks! Good stuff!

Hey Rob...
Been around the house as long as I can remember!

That sunshine does look great, doesn't it?

Hey Jo...
I can see where your weather would cause you to always have some of it!

Never tried the Bert's Bees, but I'll bet it is good as well!

Thanks, sweetie, for dropping in today!

Hey Dizzy...
I have no idea about the CAR on the can. Probably just an abbreviation.