One mystery that has been going on for a very long time, is the cause of the death of King Tut. Scholars are still unsure of what caused his demise, even after all these years. From Listverse here is the article.

The Mysterious Death Of King Tut 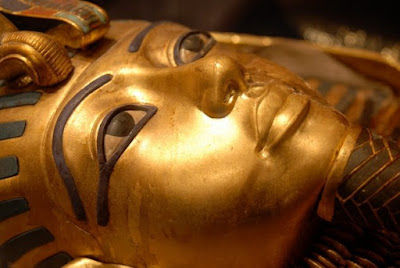 King Tutankhamun was only 19 years old when he died, and nobody knows for sure what happened. His death is a complete mystery—but not because he was in the prime of his life. The reason that Tut’s death is such a mystery is that there were so many things wrong with him that it’s hard to tell which one finished him off.

King Tut was in terrible health. He had malaria, for one thing, and he was born with so many genetic disabilities that historians are convinced his parents must have been brother and sister. He had a club foot and genetic defects that, some believe, may have made his death nothing more than a matter of time.

He also had a fractured skull that, for a long time, was thought by archaeologists to be a sign that he’d been stabbed in the head. Today, it’s believed that his head just got damaged while his body was being embalmed, but the possibility that he was murdered hasn’t been ruled out.

He broke his knee shortly before he died, too, which has lead to a theory that he was killed in a chariot accident. If he was, though, getting on that chariot in the first place was a strange decision. Tut was so deformed that he couldn’t even stand without someone propping him up.

It could have been anything, or it could have been a whole slew of different things affecting him at once. The only thing we know for sure is that King Tut didn’t get a lot of good news in his last month alive.

I reckon the moral of this tale is...when it's your time, it's just your time! Sad to think he more than likely died a very unhappy man.

Coffee back in the kitchen this morning. Rainy and cold outside!
Posted by HermitJim at 12:00 AM

I never knew he had all those deformities. Very sad...The rain hasn't started here yet, but will later today...The cozy kitchen is always nice too:))

I have watched a number of programs on King Tut and the theories about his death are many. I am a firm believer that when your time is up , no matter what you are going to go.

A lot of inbreeding back then with the belief that it was needed to carry on the lineage. Certainly wasn't an easy life. Chilly but sunny here.

Hey Mamahen...
Yeah, it was sad. Certainly had more than his share.
Thanks for stopping by today!


Hey Linda...
I agree with that theory as well. We will probably never know what really happened to cause his death.
Thanks for coming by this morning!


Hey Momlady...
I'm sure that fact caused more than a few health problems over time.
Thanks for the visit this morning!

Poor kid didn't stand a chance. Of all the documentaries on him I don't remember hearing about half of his medical problems. I did hear that about his parents.

Hey Jo...
Maybe they weren't all known about until just recently. You know how fast science is moving today and the discoveries that are being made on a daily basis.
Thanks, dear, for dropping by today!

I have been close to death a few times in my life and even about ten years ago, a doctor gave me not more than ten years to live. I feel real grateful that so far I have lived three quarters of a century.

Hey Dizzy...
Reckon you are pleased to have proven the docs wrong on that one. Here ya are, still ornery and feisty as ever (good for us!)!
Thanks, my friend, for coming over today!