This following article is something that you don't hear everyday. A complete island off the coast of Japan has gone missing, completely disappeared. 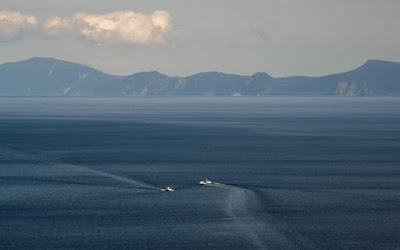 Japanese officials have recently noticed that one of their islands off the northeast coast has vanished.

The tiny island was called Esanbe Hanakita Kojima. It was completely uninhabited and was likely eroded by wind and drift ice coming in from the Sea of Okhotsk. Normally, such a disappearance would be unimportant, but the islet had some value due to its positioning. It was an outlying island used by Japan to delineate its exclusive economic zone. Specifically, it was located west of a disputed region between Japan and Russia known as the Northern Territories.

The missing islet was brought to the attention of authorities by author Hiroshi Shimizu, who went to the nearby village of Sarufutsu to work on a book about Japan’s “hidden” islands.[9] Curiously, the locals hadn’t noticed its disappearance, even though the tiny strip of land was located 500 meters (1,640 ft) away. Fishermen avoided the area because it was marked as an undersea reef on navigation charts, and the Japanese coast guard last surveyed the island back in 1987.

While this may not seem to be an uncommon thing there, I am curious about exactly what happened to it? I'm just curious that way. I got this article from Listverse, of course.

Odd that no one would notice it was shrinking....if it did , indeed, just erode away. Too cool for the patio here this am. 34° so your warm one sounds good:))

It was hard to find a picture of it.... the Chinese know how to make a mountain out of mole hill out in the ocean, maybe they can help?

Hy Mamahen...
You would certainly think so. Can't believe that no one noticed.
Thanks for stopping by today!


Hey Gorges...
Glad you found it so, my friend.
Thanks for coming over today!


Hey Rob...
Somehow I can't see the Japanese asking China for any help at all.
Thanks for the visit today!

Once again, I agree with Mamahen. Why didn't someone notice that it was gone?

It takes quite a magician to make an entire island disappear. I guess he forgot the magic words to bring it back. . .

That sort of thing happens more often than you'd think. The recent hurricane off of Hawaii rubbed out a small island during the storm.

Hey Sis...
That is a very good question, I reckon.
Thanks for stopping by today, sis!


Hey Dizzy...
In some cases that could be very unfortunate. In others, not so much.
Thanks for coming by today!


Hey Sixbears...
I didn't hear about that. Shame, really.
Thanks for dropping in today!