All parts of the world have some strange tales to share from time to time, if we know where to look. This one I found to be very interesting.

Stories like this really grab your attention. Seems that it gets more interesting as time goes on, too! 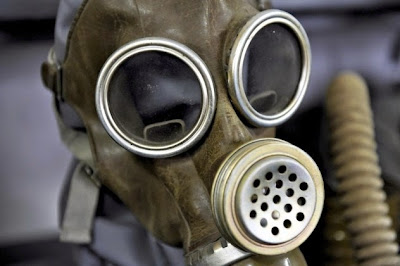 Something creepy is taking place in the woods in western Switzerland. A man dressed in a military uniform with a gas mask over his face seems to be “haunting” the place.

For more than 10 years now, locals who live near these woods have reported seeing the man walk the same path every day. They have given him the name Le Loyon, and they are terrified of him. He doesn’t speak and, when he encounters someone, he simply stares at them, and then walks away in silence. A photographer who tried to take a picture of the mysterious man reported him to be almost 2 meters (6’6″) in height.

Children are too scared to play in these woods anymore, even though the man doesn’t seem to be threatening in any way. At one point, people saw him carrying what looked like flowers while slowly walking down a pathway in the woods. According to the authorities in charge of the area, there is nothing that can be done to get the man to leave the woods since he is not trespassing and has done nothing wrong.

At one point, his clothes were found abandoned in the woods with a note saying he was leaving because “The risk of a hunt for the Beast” was too great.

It is unknown where the man lives, why he wears a gas mask, and why he doesn’t speak. Several theories speculate that he might be mentally disturbed or have a skin disease which would cause him to not want to be seen by others. But, until someone gets him to take off the mask, or at least speak out, the mystery man will remain a mystery.

Someday, when you have time, you might want to visit Listverse. They have many more interesting articles to wander through...believe me! Well worth the trip!

Coffee out on the patio this morning. How about some sausage Kolaches?
Posted by HermitJim at 12:00 AM

That is a strange tale for sure. Never heard it before. Would love to sit on your patio and try a sausage Kolache. Never had one but I'm willing to try anything.

I'm quite sure someone has followed him just to make sure the neighborhood children are safe. Good story, though! Had light snow overnight, but should melt by the end of the day.

Okay, that's creepy as heck. It's the gas mask that does it for me.

Better get that second cup of coffee.

Hey Linda...
Although we sometimes call them Kolaches, we also call them Pigs-in-a-blanket! True Kolaches are filled with fruit, I think.

Many thanks for dropping by today!

Hey Phyllis...
Snow? Going to be 81 here today, with plenty of sun! Maybe you should come South for a while!

Hey Sixbears...
Kinda seals the tag "crazy", doesn't it? It would certainly creep me out!

That is a seriously creepy story....don't know what kolaches are but if it's got sausage it can't be bad :))

Most nuts are after all friendly but he sure doesn't let people know that he's friendly :-) At least he knows he has the forest for himself :-)

Hey Mamahen...
It is pretty creepy, but evidently he is harmless!

Hey Christer...
I reckon no one wants to keep him company. I know I don't!