The Vela Incident For Monday Mysteries...!

I reckon that there isn't a government in the world that ever tells the whole truth to the people of their country. At least, it seems that way!

Although no one will fess up to the causs of this "incident", it's obvious that someone knows what caused it and just won't tell us. Guess we can't handle the truth, ya know? 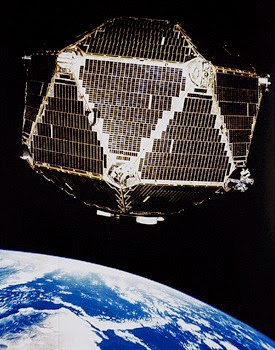 The Vela Incident (sometimes referred to as the South Atlantic Flash) was an as-yet unidentified double flash of light detected by a United States Vela satellite on September 22, 1979. It has been speculated that the double flash was characteristic of a nuclear explosion; however, recently declassified information about the event says that it “was probably not from a nuclear explosion, although [it cannot be ruled] out that this signal was of nuclear origin.” The flash was detected on 22 September 1979, at 00:53 GMT. The satellite reported the characteristic double flash (a very fast and very bright flash, then a longer and less-bright one) of an atmospheric nuclear explosion of two to three kilotons, in the Indian Ocean between Bouvet Island (Norwegian dependency) and the Prince Edward Islands (South African dependencies). US Airforce planes flew into the area shortly after the flashes were detected but could find no signs of a detonation or radiation.

In 1999 a US senate whitepaper stated “There remains uncertainty about whether the South Atlantic flash in September 1979 recorded by optical sensors on the U.S. Vela satellite was a nuclear detonation and, if so, to whom it belonged.” There is some speculation that the test may have been a joint Israeli / South African initiative which has been confirmed (though not proven) by Commodore Dieter Gerhardt, a convicted Soviet spy and commander of South Africa’s Simon’s Town naval base at the time.

I can't hep but wonder what else we might find the answer to if we had full access of all the files. I reckon many mysteries would be solved, and many answers found. Just my opinion, of course!

Coffee ot on the patio this morning. Close to 80 again today!
Posted by HermitJim at 12:00 AM

This is one someone some where knows but the "little people " will never be told I'm sure...patio sounds good. Do you like coconut can? I have one i'll share :))

So why are TPTB so afraid to tell us the truth? And do they ever? Hmmm. Would love to sit out on the patio with ya'll. Coconut cake sounds good this morning.

TPTB are afraid that we would string 'em up if we ever found out what is going on around us! Coconut cake is always a winner!

Interesting but there are so many things we will never know.

Looks like the winds here are finally dying down. Patio sounds good.

Since the US Planes that flew into the area after the flash didn't detect any radiation, I would suggest that the double flashes were two chunks of space rocks entering our atmosphere and exploding. Remember what happened in Russia where a meteor exploded over a city and broke out windows and did structural damage to some buildings. And much earlier, in Siberia where one flattened many square miles of trees.

Hey Mamahen...
Afraid we can't handle the truth, I guess.

Coconut cake sounds good to me! Bring it on!

Hey Linda M...
Very good questions that we won't ever find the answers to, I reckon.

Thanks for dropping by this morning!

Hey Jo...
You are so right about that!

Hey Dizzy...
There are many natural things that could be the answer. After all this time, you would think that someone could find the answer.

Many thanks for the visit today!

I always enjoy reading your mysteries. Nothing beats a good mystery. . . well, almost nothing.