The "Real Cowboys" For Western Wednesday...!

When it come to stories about the Wild West, I think most of us already have a certain picture in mind.

Truth is, the west was a lot more diverse than we think. I hate to be the one to pop the bubble, but many cultures and races came together to create the original genuine cowboy. The cowboy of our imagination was a product of the movies and dime novels of the period. I'm sure it made for some interesting story telling around the campfires at night. 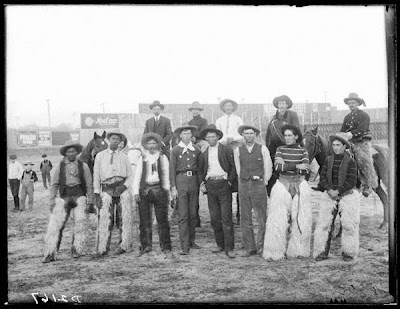 The classic Hollywood picture of the West involves white, all-American tough guys teaming up with or fighting other American white guys. Sure, you’ll get a few black people in there, maybe a handful of Mexicans and the odd Irishman for ‘comic’ effect—but it was predominantly true-blooded Americans, right?

Nope. Like late 19th century New York, the Wild West was a hotbed of multiculturalism, with people of all nationalities vying for some room. Rock Springs in Wyoming counted as many as 56 nationalities in a population of under 10,000. Slovakians, Finns, Norwegians, Germans, Ottomans, Swedes and Chinese all poured into the South and Midwest; an influx that only increased with the Californian Gold Rush. The image of the old West as a bedrock of American values is a Hollywood holdover from a time when casting non-American voices and faces was pretty much a no go.

I merely brought this up because of the fact that we often forget about the influences of other cultures and peoples had on us down through the years. Maybe we can find some way to try and make that work again, ya think?

Coffee out on the patio this morning. That OK with you?
Posted by HermitJim at 12:00 AM

Labels: multiculturalism of the cowboy

I am fine with multiculturalism. Every person, regardless of race or creed deserves a chance. It is only when that person shows he can't be trusted that I turn away from him. I don't care about how a person looks, it is what is inside of him and how he treats me that counts. Hollywood sure stereotyped the cowboy.

I grew up in a working class neighborhood - German, Irish, Italian and Polish. What the difference between now and then is that back then everyone was proud to be American - no hyphenated Americans. Now, not so much. Cowboys from anywhere are always admired for their toughness and independence. Coffee on the patio sounds good-I'll bring the Dunkins!

I agree with Chickenmom n linda...I don't judge by looks or where someone came from....but when they come to my country then try to change me or my country then I have a problem..n yes Hollywood glamorized much of history :))

A cowboy's life was not glamorous at all, it was hard, long, dirty hours with low pay (a dollar a day and found) which they spent on Saturday night. Of course I am sure there were exceptions to that stereotype.

I agree with the Ladies, now they come across the boarders and have no respect for this Country or any human. I leave it alone there.

Coffee on the patio is fine. Very overcast here today but they say no rain so I guess it will. :)

Hey Linda...
I think we forget sometimes that the foundation of our nation is built on so many different cultures.

We should all be judged by how w act toward others, in my opinion.

Hey Phyllis...
The cowboy earned the respect of many folks because of the work they did. I figure many were very happy to have the chance to prove their worth.

Hey Mamahen...
By working together to change things around us for the better for everyone is acceptable, but without teamwork and co-operation the task becomes too one sided.

Hey Dizzy...
They seemed to have a very strong work ethic for the most part. Sure didn't pay much, that's for sure!

Thanks, buddy, for dropping in today!

Hey Jo...
I reckon that's why so many are wanting to go back to the days of going along to get along.

Thanks, sweetie, for stopping in today!

"Multiculturalism" and "diversity" are terms we should avoid because they are loaded with the baggage of people who hate America. I believe the correct term is "E Pluribus Unum." It has always been that way and, if we can get past the current race-baiters, it will be that way again.