A Cruise Ship Mystery For Monday...!

Here is a modern mystery that surprisingly recent. Just the ticket for starting off another week, right?

Many of the mysteries we have for Monday Mysteries are old ones. This time that isn't the case at all. Not only is it recent, but it's close to home. How cool is that? 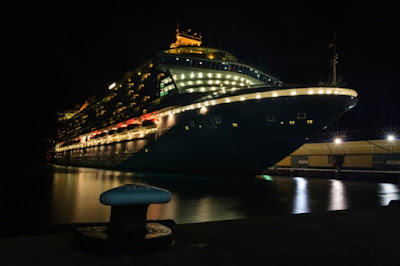 In 2011, 63-year-old John Halford ran his own successful business and was about to celebrate his 25th wedding anniversary with his wife, Ruth, with whom he shared three beautiful children. Halford was on top of the world, but he still had a dream that he wanted to fulfill before retiring—to go on a cruise. His dream came true that same year when he set off on a seven-day Thomson’s cruise on March 31.

Halford seemingly had the time of his life on the cruise liner, judging by the texts he sent his wife. Near midnight on the last evening of the cruise, John Halford was enjoying cocktails at the ship’s bar as the ship neared its final destination. He had sent his wife a text earlier with his flight details so that she could pick him up from the airport.

Ruth, who had missed her husband very much during his well-deserved break, couldn’t wait to go to the airport and meet him. Before she could leave, however, she received a call from the cruise company to inform her that John would not be at the airport, as he had gone missing from the ship at some point between midnight and 7:00 AM the next morning, when all the other passengers disembarked.

John Halford was never seen again. His wife and children fear that he went over the railing of the cruise liner, although the Thomson’s company strongly denied that this would be possible. Tragically, Halford is just one of more than 150 people who’ve mysteriously disappeared on cruise ships since the turn of the new millennium.

This story was found over in the mystery section of Listverse. Seems like a lot of people to go missing from cruise ships without being accounted for, don't you think?

Coffee in the kitchen this morning. It's cool, but dry!
Posted by HermitJim at 12:00 AM

Now I know why I haven't and will never go on a cruise!

Well this is a good one for discussion around the table ths morning. I think maybe he might have has a well planned escape from his wonderful life. Why did he go alone? why didn't his wife go along? Mysterys are fun aren't they.

Maybe he was abducted and turned into a galley slave and had to row the ship the rest of his life??

Happily married & went on a cruse by himself?

Hey Phyllis...
I would end up being one of those disappearances, I'm afraid.
Thanks for stopping by today!


Hey Jo...
That's kinda what I was thinking. Does seem a bit strange.
Thanks sweetie, for dropping by today!


Hey Dizzy...
Guess anythings possible. Must be some very long oars.
Thanks for coming by this morning!


Hey Rob...
Does sound a little confusing, doesn't it? Guess that's why it's a mystery.
Thanks for the visit today!