Some toys we had as kids have really evolved over the years. This certainly the case with this one! 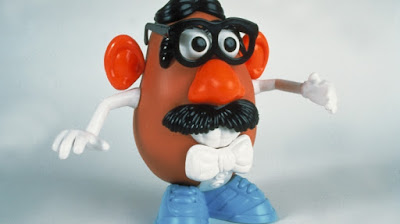 Inventor George Lerner turned to the family dinner table for inspiration for this classic: Though many kids don’t like to eat their vegetables, they might want to play with them instead. Lerner originally created a bunch of silly face parts to be used with actual potatoes and other vegetables (beets anyone?) as part of a cereal box promotion. The Hassenfeld brothers, future founders of Hasbro Inc., purchased the toy idea in 1952, packaging 28 plastic facial and body parts with a Styrofoam head, which was later changed to plastic as well. By the end of its first year, Mr. Potato Head made history as the first toy with its own TV commercial (catchphrase: “Can I have that? I want that!”) and generated more than $4 million in sales.

If only we had some of the toys we received as kids, especially in the original boxes, we would all be rich! Oh,well...

Coffee out on the patio again this morning.
Posted by HermitJim at 12:02 AM

It has stood the test of time - I still see it in the stores!I'll bring jelly donuts for all!

I remember the original Mr. Potato Head as we had one and would use my mother's potatoes. She wasn't too happy having her vegetables punched full of holes. It's nice to see toys I played with as a child still around today. Will join you all on the patio. Thanks, Chickenmom for the donuts. Have a great weekend.

I had one, too! Hope Nanny is recuperating. Take care of yourself.

I remember using the potato and even carrots, until the plastic one came out. And know they are really getting popular with the Lay's potato chip commercials.

I remember having one. Kids now think they have to be online to have a little fun.

Yep, I had one, too. But mine didn't come with a potato, I had to use a real one.

I had my tonsils out as a very small girl and my mother would bring presents to the hospital i.e. coloring books, magic slates, etc. to keep me entertained and one day she brought me a Mr. Potato Head. This toy brought back memories. It sure didn't take much to entertain us back then.

Hey Phyllis...
Jelly donuts are always welcome! Indeed potato head
has stood the test and still is going pretty good.
Thanks for coming over today!


Hey Linda...
That's the one I had also. Potato juice all over us when we finished!
Thanks for stopping by today!


Hey Momlady...
We had a lot of fun with ours, for suree!
Thanks for the visit today!


Hey Jo...
We used whatever we could get hold of. Had some heads we made from clay!
Thanks for dropping by today!


Hey Gorges...
Back then we often made our own fun outside, ya know?
Thanks for coming over today!


Hey Dizzy...
I think a lot of us had to do that. Still fun, though.
Thanks for stopping by today!


Hey Janet...
Back then things were quite a bit simpler, I think. That waqs probably a good thing.
Thanks for dropping by today!