Toy Favorites From Long Ago...!

With Christmas not that far away, it's time for all the kids to be told stories about some of our favorite toys from our own childhood. Remember back that far? I can...barely!

Some toys from our time just never really seem to go out of style. Some of them will probably outlast many of us, if you know what I mean. 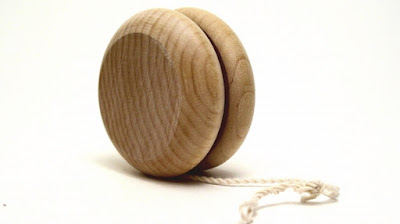 All hail the Yo-Yo! This classic is actually an ancient invention, going back to China circa 1000 B.C. Or was it ancient Greece? The Philippines? Historians may be divided as to its exact origins, but variations of the spinning-disk-on-a-string toy had certainly been around for centuries before 1928, when Pedro Flores began manufacturing the yo-yo in the United States, calling it by its Filipino name. Flores soon sold his toy company to a competitor, Don Duncan, a marketing whiz whose promotional Yo-Yo trick contests would launch the toy’s popularity into the stratosphere.

I sometimes think that some of the earlier toys were the most fun to play with...and may still be. Thing about the older stuff, you could play with them even in a power outage, ya know?

By the way, sorry about missing the post from yesterday. Medical problems got in the way and I forgot.Sometimes life happens, ya know?

It's still a popular toy today! My brother was an expert and could do all sort of tricks with it. Me? Not very good. 'Hope the medical issues are taken care of. We missed you!

Hey Phyllis...
Some folks can do all kinds of tricks with them. I see people playing with them from time to time.
Thanks for stopping by today!

I love the yo yo never could do any of the tricks, only walk the dog haha. Yes the old toys lasted forever and didn't need electric or batterys.

Yep, I think every kid had one way back when I was young. I had one but even had trouble to get it to go up and down let alone try to do tricks.

I wasn't too good with the yo-yo, though my brother was pretty good. The girls played: jacks, jump rope, hop scotch, and skated a lot on those old metal skates with a key. We played lots of games until dark. We had a lot more fun than kids today and were in better shape too. The group games were not supervised by adults, but were organized by the older children. Good memories . . .

Hey Christer...
Things iike the yo-yo were built to last, that's for sure! Maybe Santa will bring you a new one this year.
Thanks for coming over today!


Hey Jo...
I wonder if kids today would even play with one? Maybe...
Thanks sweetie, for dropping by!


Hey Dizzy...
I don't think I could ever do any tricks either. Still, they were fun!
Thanks for stopping in today!


Hey Janet...
When I was in grade school, the boys and girls both played jacks. I was pretty good for a guy, I think. My sisters were still playing from time to time even a few years ago. Thanks for the visit today!

Yes, I remember the tops and also my brother had a great collection of marbles.