Did we ever stop to consider that some of our feathered friends might miss one of their recently departed brothers? According to Listverse, they even have funerals of sorts for them. 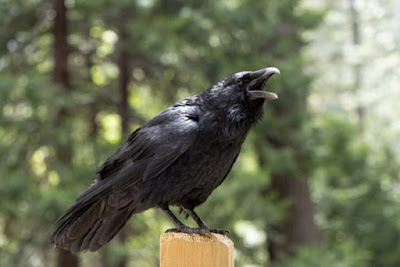 When a crow dies, its body becomes the center of a gathering of its fellows. They surround the corpse, call out to each other, and give the body extra kinds of attention. This behavior is seen in crows, jays, magpies, and ravens. However, these rituals serve a more practical purpose than mourning the dead.

Crows are very intelligent birds and have been shown to remember threats and actively avoid anything associated with that threat. For example, during an experiment conducted by Kaeli Swift of the University of Washington, a number of feeding locations were set up that attracted crows. Then those same crows were exposed to a masked human holding a dead crow in their hands. These humans were “scolded” by the crows (an alert noise that warned other living crows of a dangerous threat). Later, the masked individuals would return without a dead crow, but the behavior stayed the same. The crows scolded the person and avoided the spot. This suggests that the crows identified the mask with the death of one of their own and that any location the masked person visited could also be dangerous to them.

When a murder of crows holds a “funeral,” then, it seems likely that they are sending out warning cries to their still-living fellows and searching the area for threats. Still, when Swift repeated her experiment with dead pigeons, the crows didn’t seem particularly bothered. They cared only about the death of one of their own.

I find this whole thing a little cute and a more than a little spooky, for some reason.

Coffee inside this morning. Too hot outside.
Posted by HermitJim at 12:00 AM

That is very interesting. Learned something new today.

Hey Gorge...
Glad you found it so.
Thanks for stopping by today!

Hey Linda...
Always glad to share.
Thanks for coming over this morning!

Just went out to spray the jungle of weeds that seemed to just pop up over night with all this rain.
Ready for coffee inside now humidity is nasty

Hey Jo...
The grass just doesn't seem to grow as fast as the weeds, does it?
Thanks, dear, for dropping by today!

Hey Mamahen...
Crows are nearly always interesting.
Thanks for the visit today!

Hey Rob...
That's what I thought as well.
Thanks for coming by today!

Crows are extremely smart. I had a friend that had a pet crow and believe me, they are very intelligent.

Hey Dizzy...
I have heard that they were.
Thanks for stopping in today!