Although I have never seen the movie, nor do I plan to, there is a bit of mystery attached to the production that has never been explained. Here is the story from Listverse. 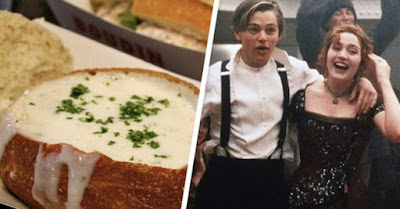 On the last day of filming the movie, Titanic, in Nova Scotia, James Cameron suddenly felt inexplicably ill and disoriented. When he started vomiting, he realized something was very wrong. Once he got back to the set, he found he wasn’t the only one feeling strange as some of the cast and crew were vomiting or crying and some even laughing.

At Dartmouth General Hospital, things took an even weirder turn when a crew member stabbed Cameron in the face with a pen while others started stealing unoccupied wheelchairs and wheeling themselves up and down the hospital corridors. Cameron, who was bleeding from the pen stab wound couldn’t stop laughing.

Once the hospital staff ruled out food poisoning, they realized that chowder consumed by more than 60 people on set had been laced with P.C.P.

Theories abounded; one of which had it that a dismissed crew member tried to take revenge by poisoning the food. Officially the mystery remains long after the case was closed in 1999 due to a lack of suspects.

Now I know that many say the movie was great, but I just have never been inclined to watch it.

Coffee in the kitchen again. Rain, rain go away!
Posted by HermitJim at 12:00 AM

I liked to movie pretty well, but I had never heard this...they say we will get some of that rain this week, sand it is much needed in our area.

I saw the movie, but never heard this story about it before. Coffee in the kitchen is fine. We have had nothing but rain for 3 days now. Getting really tired of it.

Hey Mamahen...
I'll be more than happy to share, that's for sure!
Thanks for stopping by this morning!

Hey Social...
Glad you liked the story.
Thanks for coming over today!

Hey Linda...
I can certainly understand that. I feel the same way!
Thanks for the visit this morning!

That must have been quite a site. Maybe they should make a movie of making that movie.

Hey Dizzy...
That's a very good idea!
Thanks for the visit today!

I only watched bits and pieces not into long drawn out movies. Unless they are really old movies. Love movies from the 40's when they were worth watching.

We had a big storm come through here yesterday twice. Kitchen is fine with me

I remember when this was in the news. Surprised no one was charged.

Never watched the movie myself. I knew the boat sank. :)

Hey Jo...
I agree that the older movies just seem better.
Thanks dear, for dropping by today!

Hey Sixbears...
That does seem strange, doesn't it?
Thanks for coming by today!