Here is another case of how nature can add beauty to any of Her creatures she wishes. Seeing this picture from Listverse makes me glad that I don't eat lobster. 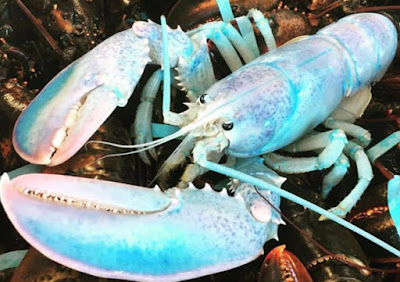 In all his years as a lobsterman, Robin Russell had never seen anything like it. When he checked his traps in 2017, there was a blue lobster between the usual brown ones. The creature also had areas with faded pink and periwinkle, giving it a mild rainbow look.

Called “Lucky,” the crustacean avoided the dinner plate and found a home at a science center. Lucky might be an eye-popping sight, but blue lobsters turn up every few years. In fact, lobster coloration is rather mercurial. A pigment called astaxanthin changes color depending on its amount, outside influences, or how astaxanthin contorts.

Usually, lobsters are brown. They only develop the bright red that fine diners know so well when boiling water messes with the pigment. Lucky and his blue brethren remain mysterious. Researchers think the reasons might include low levels of astaxanthin.

When completely removed from their diet, lobsters turn white. A genetic mutation might also be responsible. In the past, mutations produced some funky lobsters—brilliant yellows, a calico with dots, and lobsters with a two-toned split look.

It's creatures like this that make me want to stop and take a closer look at the world around me. There is a lot of beauty around id we just take the time to look.

Coffee out on the patio if it isn't raining yet...OK?
Posted by HermitJim at 12:00 AM

That is so fascinating. Don't see how anyone could eat a blue lobster. Glad the fisherman didn't eat it. Raining here, but you patio sounds nice.

Hey Gorges...
Yeah, it kinda is.
Thanks for stopping by today!

Hey Linda...
Beautiful color, that's for sure.
Thanks for coming over today!

What a beauty, hope they put him on display in a Marine Aquarium.

Hey Jo...
Sounds to me that he is being being well cared for.
Thanks, dear, for dropping by today!

What a beautiful color:))

I always look to Mother Nature for surprises in the wild.