Now here is a mystery that originated close to home for me. Maybe a little too close, if you get my drift. I found this one on Listverse again. 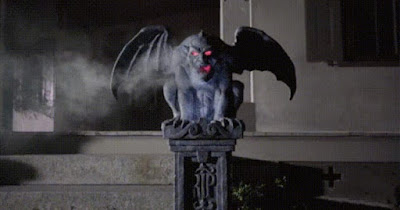 In 1986, NASA employee Frank Shaw, left his office late one evening and walked briskly to his car. He had worked a long shift and was anxious to get home. But all thoughts of home flew from his mind when he looked up at the NASA buildings and saw a black figure perching on one of its corners. Afterwards Shaw recalled the figure resembling a humanoid creature with a something like a cape wrapped over its shoulders. In his shocked state, Shaw thought it may have been a gargoyle. He also claimed to have seen two massive wings protruding from the its sides.

Eventually arriving home, Shaw told his family what he had seen and that the ‘gargoyle’ had stared directly at him. When the winged creature took flight, Shaw had run to his vehicle and drove off in terror.

Naturally most were sceptic of Shaw’s tale, but his family rallied behind him. However, they did warn him to keep his sighting a secret from his bosses so as to not be labelled ‘insane’. As time went by, Shaw kept pondering over what he had seen and eventually built up enough courage to tell his supervisor, despite his family’s advice. To Shaw’s great surprise, his supervisor proceeded to tell him that other employees had experienced similar sightings. A file on the creature had also been opened after the corpses of two resident NASA German Shepherds were found mutilated in the same location the ‘gargoyle’ had been spotted.

Over the years, no new sightings of the creature have made the headlines. What exactly did Frank Shaw and those before him see at the NASA buildings? That remains a mystery.

Whatever he saw, I'm pretty sure I don't want to see it. I would have to change my shorts, I'm afraid.

Let's take a chance and have coffee on the patio this morning.
Posted by HermitJim at 12:00 AM

Hey Mamahen...
Yeah, we don't want to do this in the dark, that's for sure!
Thanks for stopping by this morning!

It sounds like the "MothMan" that has been sighted in New England states. That is really creepy and I sure hope I never see it. Coffee outside sounds great. Fog and rain here today.

Linda,
I thought exactly the same thing. The Mothman is supposed to appear before disasters happen like the Silver Bridge in West Virginia. Since this NASA guy saw it in 1986, I'm wondering if it was predicting the Space Shuttle Challenger disaster that happened in same year.........

Hey Linda...
Could be that the two are somehow related, ya know?
Thanks for coming over today!

Hey Taminator...
What I don't understand is why they appear in certain areas and not in others. That in itself is scary.
Thanks for the visit this morning.

Sounds pretty scary if you ask me. I wouldn't want to meet up with that in the dark.

Patio sounds wonderful. Little chilly here at 60 this morning but looking at low 90's later on.

Hey Jo...
Things like this are not good to see at night.
Many thanks for dropping in today!

Hey Rob...
Certainly not a run-of-the-mill sighting, I'd say.
Thanks for the visit this morning!

Gee, thanks, Bubba. I'm leading a tour of fellow church friends to NASA in November, when it just might get dark a little early, y'know?

I'll be sure and NOT watch out for this guy!