I Recieved A Present...!


Like nearly everyone I know, I enjoy getting gifts.

For those of you that own cats, or have been around cats for any length of time know...cats are notorious for bringing home gifts for their human friends. I don't know why they do this, but they do it quite often.

They might be trying to show off what good hunters they are, or might be trying to justify their picky eating habits by showing us what kind of foods they really want, or maybe they just want to watch the reaction of the resident human when they deposit their latest catch at your feet!

My money is on the last choice! CB came in the house after being outside enjoying the recent rains. He has brought me gifts before of birds, lizards, snakes...all dead for the most part. Only a couple of times did I have to track down, catch, and release some poor critter that had survived the cat attack! Today, however, the gift was a bit different! A full grown squirrel !

Now I realize that a lot of folks might question my story that my small, lanky Siamese kitty could run down, catch, and kill a squirrel so I decided that a picture would be called for!

Besides, CB might want to hang it on his wall, if he ever gets one! 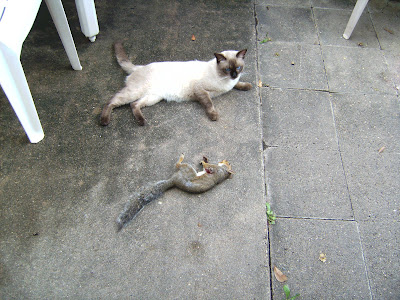 As you can tell, now that he has caught and killed it, CB shows no interest in keeping the tree rat around! He seems to think that if it won't run, it's no fun anymore! He has the same reaction to the other critters he has caught!

I'm thinking that this cat might be a good pet to have around in the event of a severe food shortage! I have eaten squirrel many times, and I would imagine that if times got really hard, I might even learn to like lizards or birds caught by "CB The Hunter Cat!"

I'm just happy that I didn't have to run down and catch this rascal after CB deposited him at my feet in the house! That would have been quite a chase, I'm thinking!

Let's have some fresh coffee on the patio this morning. The rain seems to have stopped, so we should be OK!
Posted by HermitJim at 12:05 AM

Labels: presents from the cat

LOL what a catch for CB. do you really think he killed it or found it already dead? Fred goes nut when he sees a squirrel and we have plenty of them up here.
I'll come for coffee if you dispose of that Tree Rat. I like that can I use that. :)

Hey JoJo...
The squirrel was still warm when C.B. brought it into the house.

Tree rat is already disposed of, sweetie, so you can come on over!

Hey, been a while since you had a post about your 'roomies', that is one happy looking kitty.

GOOD CAT!! Can she come up for a visit and teach my two how she did that? I hate tree rats.

One of my dogs killed two and injured one baby squirrels this weekend. I like squirrels (until they harvest fruit that I wanted) and enjoy watching their antics with the dogs. It wasnt so cute to see a pack of dogs descend on a baby like that. The poor mama is still looking for them. Still and all like you Mr Jim I don't have any problem thinking of them as a future meat source.

This is in many ways a cruel world when you stop an think about it.Eat or be eaten.

One of my cats once brought a chipmunk into the house. I thought it was dead. NOT! We had a merry chase until the critter chewed its way through the screen on my bathroom window to escape. I still smile at the memory.

Hey Anon 5:30...
C.B. seems to be pretty happy most of the time. Very easy going, and seems to like people for the most part.

His brother Smokey took off one night a while back, and has been gone ever since. Only C.B. now!


Hey Ben...
I thought you would get a charge out of that!

I've seen him chase squirrels before, but I never thought he would actually catch one! Pretty fast for a cat!

Thanks for the visit today, buddy!


Hey Sel...
I don't ever see any of the babies, just the grown-ups.

I have to admit that I was surprised! Next thing you know, he'll be bringing home dogs and small children!


Hey Ted...
I think the hunter instinct is alive and well in most of our pets!

We may have to harvest that instinct someday!

Thanks, my friend, for coming over this morning!


Hey Momlady...
That must have been something to watch!

I'm certainly glad that C.B. killed the latest gift before bringing it in. I'm not sure I want to go into chase mode after a squirrel inside!

You take care...and thanks for coming over this morning!

With my four cats the girls are the mighty huntresses. The two boys just watch. Thanks for the story and have a great Tuesday.

Hey Mechanic...
That's pretty much how it is in the world of the big cats, too! The lioness does most of the hunting and the head male gets first chair at the dinner table.

Ur CB looks exactly like my Fancy, that i lost last year. Siamese are a world apart from regular cats. Jude is what is called a red point, even tho the points are yellor. Ain't he cute? lol
He wouldn't have any idea what to do with a squirrel, but run. (away)

Hey Trouble...
I got C.B. and his brother at the same time about a year ago.

They were the only 2 out of their litter that were not black!

Now C.B. is alone, so he makes his fun where ever he can, catching birds and now squirrels!

Years ago I had a cat here. He did a good job of cleaning out the ground squirrels; about the same size as a gray squirrel. He ate them too. A few evenings ago I saw a mouse in the kitchen. Note to myself; remember to set a trap before going to bed. Later on I was sitting here at the computer and my dog came over and was acting very pesty. I looked down, and there lay the mouse. One doesn't usually think of an 80 pound Airedale as a mouser. :)

I had a great hunter cat that always left me the mouse livers. They were always presented on the rug in front of our entrance door. She'd eat the rest of the mouse right down to the tail.